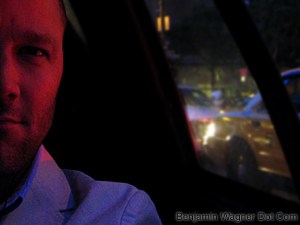 I was out cold well prior to AA#118’s takeoff, which made waking up over Eastern Ohio with Anthony Michael Hall seated just a few seats away all the more jarring.

We landed around five o’clock. It was pouring rain at JFK, which (after a week of 70° hegemony) seemed appropriate. My Town Car (#007, natch) was waiting at Passenger Pickup C. We raced to the Van Wyck Expressway where we immediately slowed to a crawl.

An hour of Blackberry and iPod action later, my driver dropped me at a six o’clock appointment on the Upper East. I stepped out of the car into full-on gridlock: busses, cabs and pedestrians — a denser concentration of humanity than I’d seen in a week of Los Angeles — inching forward in a cacophony of honks, screeches and sirens.

With a few minutes to kill and nothing but coffee and a miniature blueberry muffin in my belly, I struck out for a snack. I cued up The Doves “N.Y.” (“We’re all better off in New York”), and walked slowly around the block. The air smelled like hot steel and stone, all dry and metallic. Everyone looked diverse and interesting, talking to themselves, gesturing, moving in every direction. I bought an apple from a fruit cart, and wandered aimlessly, smiling.

An hours later, I rode in a cab down Fifth Avenue, across the 66th Street transverse (an explosion of green!), and past Lincoln Center. The two, towering Chagall paintings in The Met were aglow , PJ Clarke’s was packed — everything was buzzing.

I stepped into my apartment to singer/songwriter husband and wife Michael Penn and Aimee Mann’s cover of The Beatles, “Two Of Us.” I tucked one of my earbuds into Abbi’s ear, and held her until the song ended.

I slipped out of my sport coat, took off my bucks, pulled on a comfy t-shirt, and slid onto the couch next to my wife for Tuesday Sushi Night, televised procedurals, and the closest approximation to Heaven that I know.