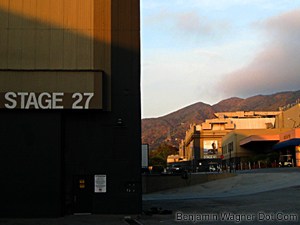 I’ve collected four NBC Universal Visitor Passes (white, blue, yellow and purple, if you’re playing along at home) in my 96 hours on the back lot.

They’ve been long hours, some chained to my computer here in the Abbott & Costello Building (a parking lot with one floor of offices, really; also, home to CSI), others racing up and down the hill in a golf cart to rehearsals, read throughs, and look sees.

Truth is, I’ve been looking at computer screen and television monitors most of the time. In between, though, I’ve seen a few noteworthy things.

Example. Yesterday afternoon, my boss called and asked me to run the pre-show format up the hill to review, which Ryan and I did. We met him at what’s called “The Producer’s Table,” where Movie Awards producers Mark Burnett, Lee Rolontz and Garett English were managing rehearsals.

Likewise, Scooby Doo’s Mystery Machine’s is parked just outside Stage 24. And there’s a motley assortment of movie vehicles gathering dust in the tram parking lots just behind the famed Gibson Amphitheater: Michael J. Fox’s “Back To the Future” Delorean (Doc Brown’s, actually), Smokey & The Bandit’s Trans Am, and The Adams Family’s hearse.

The portion of the lot destroyed by last year’s fire is almost completely rebuilt.

The weirdest thing, though, is when the Universal Studios tram rolls by, and four-cars worth of tourists crane their necks to ascertain, “Is he famous?”

Nope, nothing to see here; just me doin’ my job. 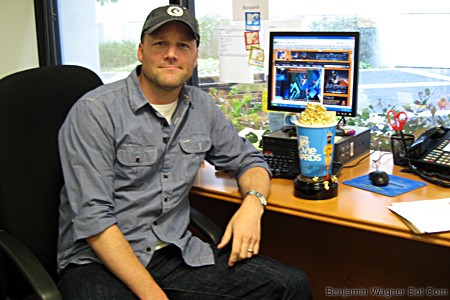 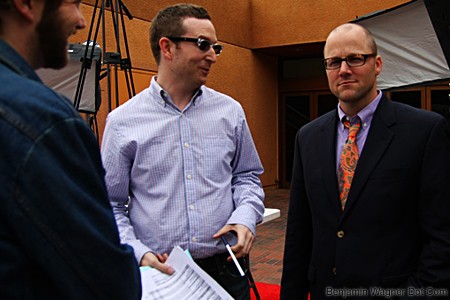 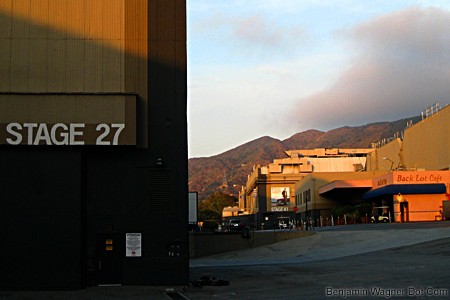