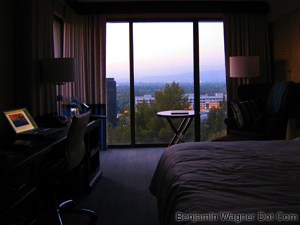 The Sheraton Universal City Hotel sits astride a great, cement-covered slab of dirt just over the hill from the Hollywood sign. My tenth-floor, corner room overlooks the San Fernando Valley: Van Nuys, Reseda, Northridge. The 101 is a stream of red and white light winding northward towards the Ventura Highway.

Universal Studios — home of The Invisible Man, Jaws, Flash Gordon, Conan The Barbarian (and O’Brien, for that matter), Fletch, The Breakfast Club, and The 40-Year-Old Virgin (among others) — sits just below my tenth floor window.

I’m here in sunny Southern California for once again the 2009 MTV Movie Awards. This year’s annual homage to mainstream film will be hosted by SNL’s Andy Samberg and feature Eminem and Kings Of Leon. My job is to oversee some 200+ on-air newsbriefs, plus numerous online blogs, articles, photos and videos.

Our offices are in what’s called the Abbot & Costello Building on the Universal lot, just down the hill from the Universal Ampitheater. Desperate Housewives and CSI shoot in the surrounding soundstages, and Technicolor Headquarters are right next door.

Technicolor was the most widely-used color film processing method of early cinema, providing hyper-realistic, saturated levels of color to films like The Wizard of Oz, Rear Window, and Funny Girl.

Not that I’m seeing a terrific amount of actual color here. With the notable exception of our annual walk-through tour of the Gibson Amphitheater (including a backstage littered with graffiti from acts like The Who, Eric Clapton, Robert Plant, Styx and Pope John Paul II and a green room complete with a cherry-red grand piano), I spent all thirteen and a half hours of my workday staring at a rented PC. When I did sneak out, though, the sky was an unfettered blue punctuated by palm trees rustling in the flower-scented breeze.

The Hollywood Dream and the machinery that sells it to the rest of the world is all around, really. Now if we could just find time to relish it…