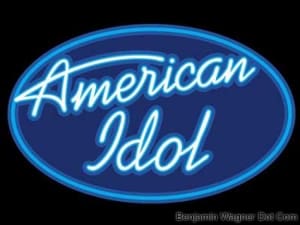 I shuttled between mixing “Feels Like Home” in my bedroom studio and “American Idol” on my living room flat screen tonight.

I caught Black Eyed Peas “performance” (freaky nails, Fergie), Cyndi Lauper and Allison Iraheta’s “Time After Time (like the pants, Cyndi, but not nearly as deep as Tiff and my version), Rod Stewart’s “Maggie May” (great sport coat), and Kara DioGuardi’s bikini moment (no complaints).

As a media executive (especially one with a hand in a few not-insignificant live events himself), I had to appreciate the spectacle: the swooping jibs, swirling spotlights, and super-slick production. The show’s producers didn’t miss a beat. They milked every ounce of narrative from the night, from interviewing Lambert and Allen’s parents (and cutting away to their breathless expressions innumerable times), to cheap, celebrity audience cameos, to manufactured surprises (like when castaway Tatiana Del Toro stormed the stage to sing “Saving All My Love” as “security” chased her off). They even gave Simon a few lines of apparently genuine monologue.

Meanwhile, I was tweaking EQ, levels, pan and affects on my currently 27-track cover of The Nadas “Feels Like Home.” It’s painstaking, repetitious, tedious stuff; not unlike staring at an eye chart all afternoon. “This better? Or this? This better? Or this?”

I paused my production just long enough to watch the final moment, the glorious instant when over one hundred million American votes were heard. And though I was both surprised and pleased with Kris Allen’s win (much as I like Lambert and relate to his show tune-loving, Duran Duran looking ways), and find him significantly more authentic (if you will) than most of the other contenders on the show, I was still left cold.

I couldn’t help think of all of my musician friends, each one struggling in his or her own way, slogging it out night after night in some honky tonk bar room, or beer-stained basement, or rinky-dink recording studio. And I felt a little cheated.

It seems to me winning American Idol is like banking on winning the lottery instead of a lifetime of reasoned savings, or liposuction instead of exercise. They’re what my father refers to as “microwave” solutions. Sure, they’re quick and painless, but do they last? Do they mean anything? Are they good for you?

Here’s to Kris Allen, then. Moreover, though, here’s to the real American Idols, the Casey Sheas, Raining Janes, and Nadas of the world, the kids singing along to a record player, or dancing with tennis rackets for guitars. They’re the real winners, because they’re in it for the love of the song, the sound of the band, and the warmth of the crowd, not the Golden Idol.