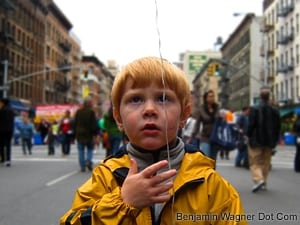 The balloons were Trojan Horses, really, or slight of hand at best; mere diversions intended to lure the children closer before handing off a pamphlet to the smiling parents gently instructing, “What do you say?”

Once in Ethan and Edward’s hands, the shiny, green and orange West Side YMCA helium balloons trumped all of the action at the Amsterdam Street Fair. They stood mesmerized in the center of the street, oblivious to the steady stream of strollers, bikes and pedestrians, the barking Gyro vendor, and even the mixtape salesman playing bongos.

Balloon activities were limited: letting the string slide through their little fingers then catching it before it floats away, and bopping on another on the head and giggling.

There may be nothing more heartbreaking than watching a helium balloon slip from its mooring and float slowly out of reach as a child’s delight turns to dismay and then, disaster: soul-crushing, heart-wrenching, tiny-little tears that spring from the corner of bright, blue eyes and plummet to the concrete like rain.

The parental response, of course, is reasoned explanation. I’m not sure either of them can hear through the din of sadness, disappointment, or rage; clouded vision and rushing ears. Can any of us? Theirs was buck passing.

“But Edward made me!”

In the end, the tears dried (though they would not be the afternoon’s last), and the Y was more than happy to provide additional balloons (and pamphlets).

Still, for the life of me, I can’t shake the sight of Ethan’s face in that instant between absolute, unfettered joy and utter, profound disappointment. It’s an impossible lesson to learn: world’s change in an instant, then float away forever, leaving us with nothing but an empty strip of ribbon.