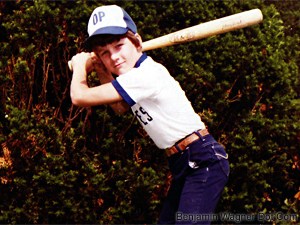 I’m pretty sure it’s the oldest thing I own: a tattered, No. 80, nine-inch, horsehide-covered, cork and rubber-centered regulation baseball with with seven faded words written in capital letters: 1981 Pinto North All-Star Ben Wagner.

I hit the first RBI in that all-star game, a triple. It was a scorching-hot July Fourth at Ridgeland Common in Oak Park, Illinois. There was red, white and blue bunting and everything. Of course, it was tee ball, so that triple didn’t add up to much of a baseball career, and doesn’t mean much now. But it did then.

Wiffle Ball. Now, that’s where I picked up my real baseball chops. The teams were small, and always the same: Chris and Sean against Ben and Dusty. It was the eldest brothers against the youngest.

Sean and Dusty Wells lived across the street. We spent every day together for nearly five years. And then they moved to Nashville, Tennessee. Sean’s now a golf pro there, married with two daughters. Years pass when we don’t correspond, but the memory of those carefree days and cricket-song nights running through backyards are constant. Last night, he sent me an email.

My daughters and I went out and bought a yellow wiffle bat and ball a couple weeks ago and of course. How many wiffle ball games do you think we played in the time we lived on Forest Avenue?

Life is different now. Neighborhoods aren’t the same: computers, DVDs, video games. There aren’t kids their age living around us and they go to school eight miles from the house, so they don’t ever run home, throw their book bags on the floor and head out. Besides, life isn’t like the old days when our parents would say, “Be home when the lights come on.” They hardly get to go outside at all without one of us around.

Every night when I leave the girls room I wonder, are they having as much fun as we had? I certainly hope so, but is it possible? My memories of the Oak Park years are the best. We did so much! Sports, kick the can, block parties, talent shows, more sports, ten versions of tag, snow, etc etc.

You and Chris were such a big part of my life back then. I just wanted you to know that you’re thought of every day and night.

A full day passed before I was able to respond. Sean’s email jogged all sorts of memories of kick the can, hide and seek, touch football and — of course — Wiffle Ball. Those were sweet, meaningful times. I’m grateful we had them. These days, though, it’s twelve hour days in front of the computer. It’s branded advertising, advertorial, and integrated marketing. It’s smoked glass skyscrapers and a Cliff Bar for lunch.

I’m not a parent yet (God willing, it’s just a matter of time now), but I appreciate your point as a grown up kid myself. My job’s a real m*therfucker. It’s not quite how I imagined grown up life would be. There’s less joy, less play, less sunshine. Everyone tells me kids’ll help recalibrate that, and afford me some perspective. And I hope so. Because rare are the days (even with marathons and triathlons) that I’m outside more than a few minutes.

With my job, my new(ish) marriage, and imminent fatherhood (to say nothing of the economic downturn), I’ve been wrestling with “growing up” and all the losses that go along with it quite a bit. Lately, I’ve just been trying to remind myself that it is what it is, grace and beauty and meaning are how you approach them, and where you find them, and how you remember them. We’re blessed to have some great memories, and more yet to be made.

For heaven’s sake, let’s put on a talent show in the garage soon.

There’s no going back there myself. I get it.

But maybe what Sean’s inadvertently telling me is that there’s a road ahead that looks a little like Forest Avenue.

Someday, if for only a second.