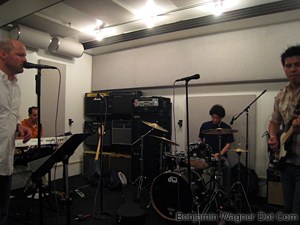 Oh man, wait until The Nadas get a load of this.

At one point in tonight’s rehearsal, I said to the guys, “You know this is The Official Song Of The City Of Des Moines™, right?”

But let me back up…

My name is Benjamin Wagner. By day, I am a middle manager for a Fortune 500 media company. By night, I am an aspiring rock star. You may have heard one of my twelve records. Or maybe you know one of my recordings, like “Dear Elizabeth” or my cover of “Leaving On A Jet Plane” (very popular on iTunes!).

My label is a great, little independent out of the Hawkeye State (that’s Iowa, folks), called Authentic Records. It was founded by a great, little rock band out of western Iowa called The Nadas. You may have heard of them. Playboy Magazine called them “The Best College Band You’ve Never Heard Of” (technically, it should have been “The Best College Band Of Which You’ve Never Heard,” but whatever).

Anyway, The Nadas celebrate their fifteenth anniversary this year, and are doing so (I’m pretty sure you’re hearing it here first) by assembling a tribute album comprised of all of their label mates: The Josh Davis Band, The Tyler Thompson Band, She Swings She Sways, Dick Prall, Bonnie Finken, Fat Andy, and yours truly.

Song selection was a bit haphazard (which is to say, I’m sure more than one band lobbied to record this one), but I ended up with “Feels Like Home” from the band’s 2008 release, “The Ghosts Inside These Halls.”

Now, I love a bunch of the band’s tunes, so why not “Coming Home?” Or “Hallelujah?” Or “California II?”

“Feels Like Home” is an amazing song. Mike wrote it on commission for the Des Moines Chamber of Commerce, but managed to write a song as much about the city as a woman. The band released the song as a single the year after I spent three weeks on the road and in the studio with the band, a period of time the led to my 2005 CD, “Heartland,” but also a reconnection with my birth state. In fact, I was hoping the guys would perform it at Abbi and my wedding (it was us or The Little Bear Saloon, and The Little Bear Saloon won). What’s more, the “Ghosts” recording is muscular, dynamic, nuanced, and completely compelling.

None of which are adjectives I would have employed on behalf of our rehearsal tonight. We spent nearly two hours trying to find our footing. First, we attempted a straight version, then quickly dispensed of it; not raucous enough. Then we started tweaking it. First it was a slow, arpeggiated ballad. Then we tried to give it something of a Coldplay spin. We finally arrived on something I described as “U2 meets The Replacements.”

We’re recording this Saturday with our pal Travis Harrison (the gentleman who tracked our first holiday single, “A Holiday Benefit.”. My assumption is that — despite our shaky rehearsal — we’ll knock out a draft pretty quickly and then move onto some other new songs (“Waited Up,” “Someday, Baby”). And then we’ll hop a cab to Rockwood Music Hall for our double bill.

Hopefully. Jason and Mike will be otherwise occupied.