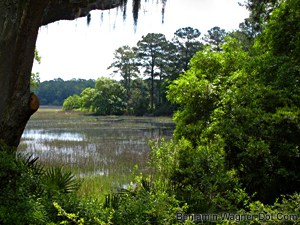 I’m a long-time admirer of CBS Sunday Morning, especially the segment before the show’s closing credits when our host (once, Charles Kuralt and now Charles Osgood) transports us somewhere tranquil and scenic for a few, restful moments.

Those patiently unfolding natural scenes — from a babbling brook in Arcadia, Maine, to the desert alpinglow of Virgin Wilderness, Arizona — were a final respite, it seems, between the coffee, couch and New York Times, and frenzied week ahead. Ad time (if not time itself), one imagines, was less scarce upon the show’s inception in 1979. The shots lingered then, rarely panning or zooming, just being. Today, the cuts feel more harried, the segment abbreviated. Fitting.

The population of Bray’s Island, South Carolina, is somewhere around 400. People are far outnumbered by herons, snakes, lizards and alligators. The nearest town, Sheldon, counts 4,966 residents. Even with the Marine Corps Air Station in nearby Beaufort, it’s not unusual to hear nothing at all for hours on end.

It was with CBS Sunday Morning in mind this Sunday morning, then, that I paddled through the cordgrass and into the wide channel of the Haulover Creek, hung my camera over the side of my canoe, held it as still and unflinching as possible, and captured one, fleeting minute of breathtaking solitude.