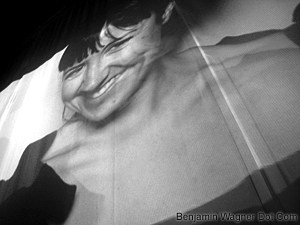 “We have Will Ferrell, a monkey, a snake, and a baby pool but we don’t know what we’re doing with any of them.”

And it was that kind of night.

And then I limped home on my bloody foot.

But lemme’ back up. And if you’re can’t stomach reading about plantar warts, then you should probably stop reading now.

A few weeks ago, I hit a few doctors in one fell swoop. One of them was my dermatologist, Dr. Ariel Ostadt, who reported that my left foot was rife with plantar warts. Yeah, I said it: plantar warts. Verruca plantaris, benign epithelial tumors caused by infection by human papilloma virus types 1, 2, 4, or 63 (mine are all 63s, for sure). Gross, I know. But we’re talking 10% of the population here. Especially dudes who hit a shower now and again. Yeah, I should have worn the flip flops, but…

So I jogged to my Dr. Ostadt’s this morning at eight assuming he’d freeze the Mo Fos (as he did with my first treatment three weeks ago), then send me running back home.

My first clue should have been the sight of the scalpel in his hand. Or when he said, “I’m sorry. Treatment of the feet really hurts.”

Point an X-Acto blade at the ball of your foot, plunge it in there, repeat, and then call me.

Because it’s then, after cutting away all of the skin around the affected area (and we’re talking ball and pad of the foot here, people), that Dr. Ostadt (really, a terrific guy otherwise) began spraying the affected area (ostensibly, an open wound) with liquid nitrogen (a liquefied atmospheric gas produced industrially in large quantities by fractional distillation of liquid air that, when contained in a vacuum flask, stores at -321°).

I took the subway home (not recommended wearing running tights during rush hour), showered with a plastic bag over my foot (highly ineffective and still resulting in a bloody bath mat), then took a cab to work where I spent the afternoon popping Tylenol at my desk. Somewhere in there, the following was said: “We have Will Ferrell, a monkey, a snake, and a baby pool but we don’t know what we’re doing with any of them.”

Which is all I can say about that, except that I thought to myself, ‘Save this conversation for your memoir.’

Fast forward to 8:07 p.m. EDT. I cross 28th & Park to meet Abbi who is standing astride the Conde Nast Hot 100 red carpet. Oddly, no one shouts my name when I pass the cameras and step inside the thumping, crowded club.

Inside, the place is teaming with copy writers, assistant editors, and a fair dose of executives who appear to believe “Bright Lights, Big City” still current. We grab a drink (Petron Mojito!), then dive into the pin-striped crowd. The gathered are third-tier fabulous, wishing to be somebody or see somebody famous. They scope us out and size us up as we push past. ‘Sorry,’ I think nearly spilling my drink on a cluster of editorial assistants, ‘Just me.’

“In case you’re wondering,” I scream over Yaz’s “Don’t Go,” “This is my worst nightmare.”

We find an empty spot against the wall and move onto our second Petron Mojito.

“She shouldn’t call attention to her legs,” Abbi says of a woman in plaid, fishnet stockings.

A line is forming in front of us for the Petron Photo Booth. Those photos are then projected on the wall behind us. Which is when I notice the guy across the room, holding a digital camera in his hand and waiting for his mug to be splashed across the wall (Warhol’s fifteen minutes diminished).

“Nah,” I say. “People are having their picture taken, then standing back and taking pictures of their picture projected on the wall.”

Seconds pass. Abbi leads me to the photo booth. We don’t wait for it on the wall, but instead stride confidently (though painfully) for the street. Park Avenue is a sea of tranquility in contrast. I limp westward on my bloody stump, each step burning mercilessly. We hail a cab, and settle in, quietly giggling at the absurdity of it all.

‘Here’s to tomorrow,’ I think as we slip through Midtown towards home. 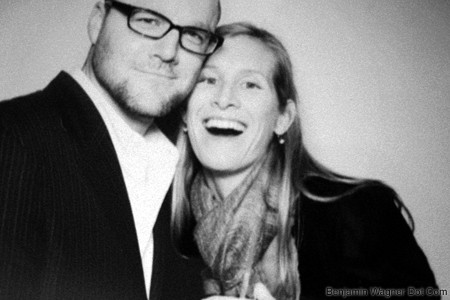