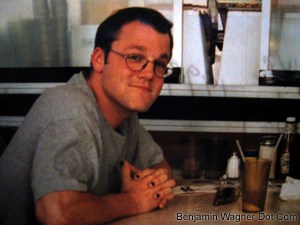 The city felt dangerous from the moment I stepped off that Greyhound from Saratoga Springs. It was teeming with people — dirty, loud, delusional people gesturing wildly to no one at all. It moved at a pace I’d could scarcely comprehend as I dragged my duffel bag up Ninth Avenue. So I kept my eyes to myself, and tuned out the din with the mixtape on my Sony WalkMan (likely hits: Counting Crows “Anna Begins,” Dar Williams “When I Was Boy,” and REM’s “Losing My Religion”).

I lived with my brother in a railroad apartment on 56th & Tenth. Our narrow, 12’x48′ one-bedroom featured exposed brick, hardwood floors and a fire escape on which I spent hours watching the street from above: the high school (later to inspire “Dear Elizabeth”), the avenue, and the taxi garage later to be torn down to make way for building in which Abbi and I live today.

I survived on generic hot dogs and concentrated orange drink from the A&P on the corner (now another upscale apartment building, The Nicole), wiling away afternoons pitching my reportage skills on the telephone. Chris worked two jobs to pay our rent. We spent evenings smoking pot, watching Jackie Chan movies and eating Haagen Dazs. Within three months, I’d visited newsrooms at WNBC, The New York Times and Newsday, before blundering my way into an internship at Men’s Journal Magazine that would lead to freelance work at Rolling Stone Online.

No, the city was for tougher, more-adventurous types then. Or so it seemed to me in my Today’s Man sport coat and Eastern Mountain Sports fleece. Sure, Chris and I rode our Cannondales to Brooklyn, and took in Luna at S.O.B.s, but we still looked up at the skyline like visitors, voyeurs, tourists.

Which is the beauty of being twenty-four. It didn’t occur to me that The Mercury Lounge was busy booking Dinosaur Junior, or that MTV News had bigger fish to fry in Kurt Loder. I didn’t know what I know now, just that everything was larger than life, and mine for the asking (if only I had the nerve to ask).