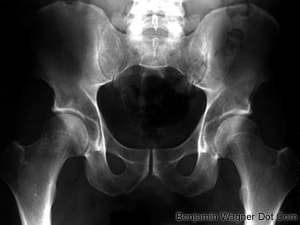 “I’m crazy,” Dr. Klion says. “I jogged in from West Chester this morning.”

“Yeah, I’m doing the Grand Canyon Rim To Rim in five weeks. 46-miles, five-thousand feet up and down, then back again.”

Now, the whole reason I go Dr. Mark Klion is because he’s the best kind of crazy. The walls of his Upper East Side office make it plain. There are just two frames on the wall: one of the Good Doctor crossing the Ironman Kona finish line in 11:12:51 with his daughter on his shoulders, and a smile ear-to-ear; and a D.C. Marathon plaque with his time: 3:05:07.

And by way of context, this is the guy who told me days after I injured my knee in a freak slide accident one-week before the NYC Marathon, “I’m not going to tell you not to run, but I will tell you it’s gonna’ hurt.”

I’d originally scheduled my appointment during last Monday’s DoctorFest, and all-day affair that included the dermatologist, dentist, audiologist and g.p. (really, a desperate attempt to justify a personal day), then Klion bumped me for a hip replacement surgery.

Which is ironic, given that, these days, I wouldn’t mind a new hip myself. In fact, most days, the pain extends from my lower back, through my right hip and down to that aforementioned knee. It comes and goes, and has for years. It’s worse the less I run or stretch, and better the more I run and stretch (which seems counter-intuitive, but there it is).

So I took of my jeans, put on some silly gown, and explained.

“I’m going for my eighth NYC Tri and tenth NYC Marathon this summer,” I said. “I wanna’ do better on both.”

Then I did as I was told: tip-toes, heels, one leg, the other, jump, kneel, balance.

Ten minutes later, I was staring at an x-ray of my junk. Klion pointed out a thick white line in my femur.

“That’s called a bone island,” he said. “It’s a build up of calcium in your bone. Unrelated. No big deal. Probably had it since you were a kid.”

“And there’s a fleck of calcium here in this fibrous tissue,” he continued. “Also no big deal.”

“See you at the finish.”