The Death Of The Hero 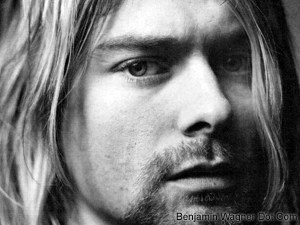 The first time I played a proper rock ‘n roll venue was in the fall of 1991. Before the audience, the amps, the lights — before anything, really — the first thing I noticed stepping onto that dismal, sticky, black-box Lost Horizon stage (don’t look for it; it’s not there) was a hand-made sign reading “No Smells Like Teen Spirit!”

Nirvana’s “Nevermind” was in the process of wrestling the airwaves from Michael Jackson and Guns ‘n Roses that fall, a battle first-evident on rock venue stages across the country. Where “Stairway To Heaven” and “Sweet Child O’ Mine” had once dominated cover band set lists, “Smells Like Teen Spirit” now ruled the day. Hence The Lost Horizon’s prohibition.

It’s difficult to characterize how radically new, different, and dangerous “Smells Like Teen Spirit” sounded then (especially for a kid reared on REM and U2). Yeah, Butch Vig polished the hell out of it, but it was still plenty tough: loud and dissonant with throat-searing vocals, crashing cymbals, rumbling bass, and a sloppy, serpentine solo. It was everything Michael Jackson, Brett Michaels and — by 1991, anyway — Axl Rose wasn’t.

Little wonder your average basement band wanted to cover it, then. Canonized, lionized and fetishized as the songs been in the intervening eighteen years, “Smells Like Teen Spirit” remains a powerful, compelling, catchy song. It’s simple enough to play: four chords, loud/quiet/loud. And it sounds dangerous and unhinged — as rock ‘n roll should.

Likewise, canonized, lionized and fetishized as Kurt Cobain has been in the intervening fifteen years (to the day) since his body was discovered in the greenhouse above his Seattle home, his presence — and legacy — remains powerful. Part of the problem (for Kurt, anyway) is that he remains a compelling presence (or absence) for the same reasons: he seemed dangerous and unhinged — as rock ‘n roll should.

For me, though, what made Kurt so compelling was neither the danger, nor the defiance. Sure, it was the music. The whisper/scream/whisper dynamics and simple, poetic even disturbing lyrics enabled introspection and rage in equal turn. Melodically, Kurt’s songs were as beautiful as they were discordant.

For me, anyway, what made Kurt heroic was his raw, unbridled, unvarnished emotional integrity. He was guileless, an open wound bleeding for all to see. There’s a disturbing, exhibitionist quality to that, sure. But in a world of posturing, extreme makeover, deceit, secrecy, spin, and corruption, Kurt’s was a lone voice, warts and all. These days, I find nothing more heroic than honesty and sincerity.

In his column today, my colleague James Montgomery (a tenth grader when Cobain died) wrote eloquently, “He was hope, he was heft. He was the everyman, the end of the rock star, the punk dream realized.”

He concludes, “I lost the idealism of youth [that day]. And the idealism that comes with plugging in a guitar and playing it very loudly (and very badly). That’s never going to come back, either. Probably for any of us.”

I had just arrived at Uncommon Ground, the Saratoga Springs coffee shop at which I worked after college, when a co-worker blurted out, “Didja’ hear? Kurt Cobain killed himself.” It hung in the air a second before she blurted out, “Coward,” and walked away.

Whether or not Cobain was a coward didn’t strike me as the point then, and still doesn’t. He was dead. He would never write another song. It was over.

To James’ point, though, it’s been difficult to be idealistic ever since. Maybe it’s just retrospect; Cobain’s ascent was prior to the Internet-fueled, “Celebrities Are Just Like Us,” paparazzi feeding frenzy, before Michael Jordan gambled, Bill Clinton lied, Michael Phelps inhaled and Bernie Madoff stole. Our heart have been broken a thousand times since. Cobain, then, was a hero before the death of the hero, before every bit of shining armor came with chinks and cracks.

Maybe it’s for the best that heroism has reached such implausibility that only Hollywood’s CGI, collagen and makeup machine can sell the mystery (and then, only on the big screen; on the sidewalks of L.A. we see witness narrative entirely). Our expectations may be forever tempered, our sense of the thing relegated to dusty history books.

Maybe it just takes a gentle wind to whip those embers into a blazing fire. Maybe the hero’s in all of us, just waiting for us to take a leap of faith and believe in the sound all over again.