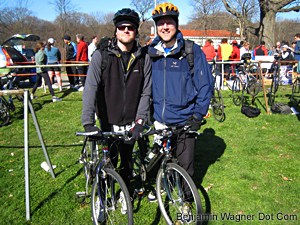 Let me be frank: I was neither properly prepared, nor properly trained for Sunday morning’s race. Heck, I wasn’t even properly rested. I’ll chalk some of it to the length of the event (a 2.1M run, 10M ride, and 2.1M run don’t quite constitute The New York City Marathon type preparation), and some to hubris.

Whatever the case, I was out ’til nearly midnight the night before during which time — yes — I had at least one (possibly three) Brooklyn Lagers; all the better (I reasoned) to complete the Brooklyn Duathlon.

Still, Times Square was soothing as I drifted down the center of Broadway at six o’clock this morning. The streets were empty. The sirens were muted. The sky was waking up. I coasted into the subway station, tossed my bike on my shoulder, and descended to the platform where I met Chris.

We rode the Two Train (a local, sigh) in silence, standing the whole ride. When we emerged Grand Army Plaza, the sun was peaking over the Brooklyn Museum of Art. By 7:08, we were registered, racked, and ready to go. Unfortunately, the race wouldn’t begin for another 52 minutes.

The Brooklyn Duathlon is an intimate affair with less than three hundred racers (in contrast with the Marathon’s 30,000). The start/finish line in a rinky dink banner over just one lane of parkway. The transition is marked off with neon-pink tape.

None of which, apparently, diminishes the intensity of the racers. Sure, there were a few more soccer moms and mountain bikes (including mine) than usual, but there were plenty of d-bags with five thousand dollar tri bikes with all the attendent bells and whistles.

Like the dude racked next to me. He was riding a four thousand dollar Litespeed Saber. He had the shoes, and the tri-suit. And, yeah, everything matched. Well, I ran into the first transition with Douchey McDouches Alot, but — as I didn’t have to change into my bike shoes — blew straight out past him. I saw him later on the course wrestling to get his water bottle into its seat rack. Which is when I lapped him.

Anyway, Prospect Park was beautiful. The dogwoods were in bloom. The lake was sparkling in the sun. And were it not for the constant headwind, that darned East Drive hill, and my utter lack of training that left me sucking wind on said uphills, the race would have been a breeze.

In college, that would have been a B+, easy.