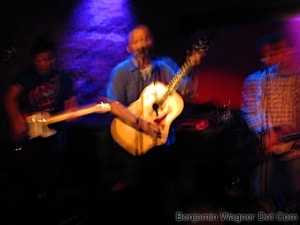 It was somewhere around Forteenth Street on the Downtown F that it dawned on me that maybe I’d been too ambitious with my first rock show in nearly six months.

A collection of greatest hits, the ones that come naturally from years of playing? Reasonable. But not the plan.

Set lists are like AAA Trip Ticks, except you draft your own highways. Sure, the trip should be scenic and diverse. And hopefully there’s a payoff: a mountain vista or the sparkling sea, perhaps. Either way, the road — gravel, pavement, freeway — is of your making.

For some reason, then, my six months of sporadic practice, songwriting and recording partnered with just one, two-hour rehearsal with the band inspired a rambling route full of tricky moutain passes, inner-city detours, and travel companions who may or may not know the map.

“Hey guys,” I emailed Monday morning. “Don’t kill me, but I wrote a new one yesterday that I think we should add.”

All of which seemed superfluous when, at 7:23 p.m. Thursday night, I stepped into a nearly-empty Rockwood Music Club and had my Murtaugh moment.

“Maybe I am too old for this shit.”

If no one showed, I reasoned, it was a sign: no one wants to watch a 37-year-old singer songwriter perform. (Or this one, anyway.) Ordered a beer, settled into my bar stool, and resigned myself to a quiet night. (Heck, I reckoned, Springsteen played for two people in a Boston bar once, and one of ’em was John Landau).

Chris showed first (of course, he had to). Then Tony (of Who’s The Bass fame) and Jamie. And then it really began: Nicole, Vanessa, Rachel, Nick, Christofer, Patrick, Ryan and Adam, Pembry and Pedro, Jamie, Meg and Abbie. What with various plus ones and all, we had a rock show on our hands.

Now, I may have been knuckleheaded enough to toss a few potholes into our set, but I was wide enough to pave us some on ramps too. We can play “Giving Up The Ghost” in our sleep. Which is why we typically open with it. Which is a good thing, because scrambling onto a tiny stage in a crowded room, setting up, line-checking is no easy task in five or so minutes. So Chris’ eight bars of shimmering, arpegiated guitar afford me a few seconds to look around the room, feel my feet beneath me, and take a deep breath. And then it’s on.

The wrenches in Thursday night’s works turned out (as always) not to be. Jamie Leonhart joined us for “Someday, Baby, ” and song the band learned Monday night. We held it together (though the chorus has one heck of a high note in it). Then we did “Killing The Blues,” which — on account of the implicit pressure of not sucking next to one of New York City’s most-luminous voices — never sucks. And then we turned it up: “The Rest Of My Life” (for which I dropped the guitar in favor of the tambourine), “Dear Elizabeth” (during which I stared longingly into the lights, attempting to relish the inevitably-fleeting moment).

Then (after a tiny conference on how to start it) we dove into “Waited Up.” Now, at this point it’s 8:46 on a Thursday night. I wrote the song Saturday afternoon, recorded it Sunday night, and rehearsed it with the band Monday night. It’s 96-hours-old. Still, it totally rocked. (Afterwards, Megan — who’s seen enough rock shows to know, and wouldn’t waste her breath if she didn’t mean it — gave me some pretty major props: “That could easily be a Kelly Clarkson song!”).

And then, as soon as we’d begun, we were exiting our Rock ‘n Roll Superhighway. Chris gave us two more measures of G (in this permeation, the intro to “Live Forever”), and we piled on. I strummed. I jumped. I scissor kicked. And we pulled away waving… 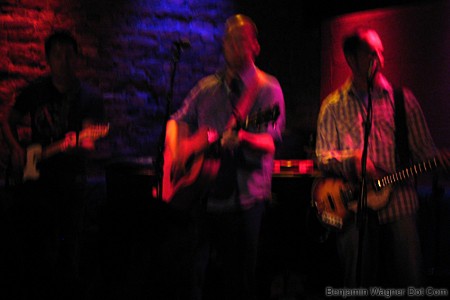 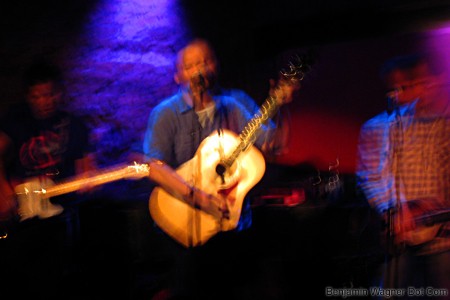