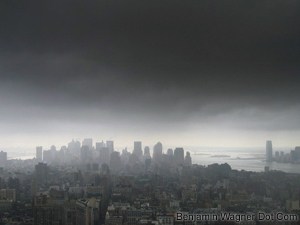 My office phone rang at 5:47. Caller ID indicated it was my wife calling from her cell phone, unusual for that time of day. I was knee-deep into a twice-delayed annual appraisal, but begged off to answer.

“Hi honey,” I said, noting the sound of the street in the background. “You ok?”

“No,” she said stuttering. “I’m on the corner with a policeman. I feel dizzy… I…”

“Where are you? I’ll be right there.”

I was in Times Square within two minutes, power walking uptown to 56th and Fifth Avenue to where, apparently, Abbi had nearly collapsed in front of Abercrombie & Fitch.

The cold mist turned to drizzle almost immediately. I scanned the horizon for available cab lights, foiled twice by upstream commuters. All sorts of worst case scenarios ran through my head as I strode uptown, cutting off tourists, bumping into businessmen, and generally sprinting to my wife’s side.

Abbi was kneeling half-dazed in the rain, one hand on her head, one the sidewalk. I crouched alongside her. She was white as a sheet, and shivering. “I’m so nauseous.”

It was in the intervening five blocks that New York’s abject hostility became terribly apparent. In my heightened state of concern for Abbi, everything was amplified: the cluster of construction works hollering at one another, the gaggle of Japanese tourists crowding us off the sidewalk, the businesswoman screaming into her BlueTooth. It was all bone-jarringly cloying, and I wasn’t the one throwing up.

Back home, I helped Abbi into her pajamas, tucked her under the covers, and took her temperature. I was at something of a loss. I didn’t know if we should head to the ER, or just stay put. A tidal wave of realizations rushed over me as I plied her with saltines and Gatorade. I thought about how infrequently I’d seen her unwell, and how much I hated it. I flashed forward to visions of rushing our sick babies to the doctor, of growing old, of dying. I stood over her as the color returned to her cheeks thinking, “I don’t want anything bad to happen to her ever.”