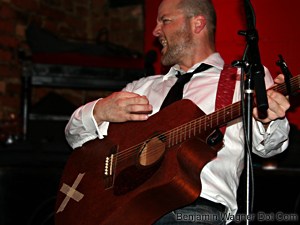 Not that anyone noticed, but I took Q1 off from rock ‘n roll.

Dateline: December 31, 2008. Between my new job description, marathon training, long-delayed documentary, and never-ending aspirations to rock, I figured something had to give. I’m never gonna’ succeed at anything if I don’t focus up. Something had to give. I chose rock ‘n roll in favor of my day job. There: I said it. I chose middle management over music.

Of course, that decision was probably made long ago. I moved to New York fourteen years ago this month. And while I pledged that I’d pursue music and journalism at the same time, my feet did the real talking. You are what you do, not what you say. I spent forty hours a week typing words into a computer. So here I am.

Which is not to say I’ve given up on rock ‘n roll. I just took a couple of months off. In fact, having endured my self-imposed moratorium, booked a show at the first possible Q2 opportunity; I’m performing with Chris, Tony and Jamie (plus special guest Jamie Leonhart) at Rockwood Music Hall this Thursday night.

And so, as I wrote last week, the guitar’s out of its case (in fact, the mahogany top is cracked; but that’s another story for another time). And back in my arms, my Martin DX15E is singing again. Those same chords sound new again. The songs are coming back.

Like “Someday, Baby,” a song I wrote in Vermont last month about becoming a father… someday. And “Waited Up,” a quick, little, old-school pop song I recorded this afternoon. They’re both yours to download below. Have a listen. The band, on the other hand, hasn’t heard either. Still, we’re going to give ’em both a shot on Thursday. Why on earth would you want to miss that? Four men on a wire.