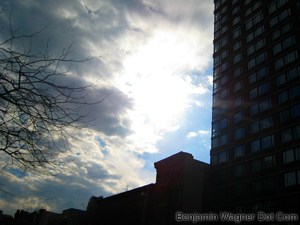 In February, I traveled to and from California three times in as many weeks (with a break in the middle to run a marathon. At the end of that red eye-inducing run, I decided that I could provide greater value to my colleagues, my wife, and myself right here in New York. So I put the breaks on.

This was the unprecedented third weekend in a row that I’ve spent home with Abbi. And while these otherwise lazy weekends still pass with remarkable speed, they have certainly proven valuable. For starters, my guitar has not only made its way out of its case, but also into my arms. What’s more, I’ve even written a few new songs.

I knew last fall that 2009 was gonna’ be a m*therf*cker — and not just because the banks were all going belly up. My new role at work was going to demand nearly full-time, eight-day-a-week, sunrise-to-sunset attention. And so I asked Abbi for special dispensation on major decisions like babies and moves. I rainchecked gig offers, and generally assumed my social life was on hold at least through Q2. I hunkered down for a tough patch. And it has been tough.

Sure enough, though, the first fiscal quarter of the year approaches, and I’m beginning to feel at least a tiny bit adjusted to the scope of the challenge, weight of the department, and the certainty that every elapsing moment brings uncertainty.

The past two Saturdays have found me greeting the morning with a cup of coffee and my guitar. Yesterday, I taught myself a few new covers (“I Can See Clearly,” “Something So Strong”) in anticipation of my May 2 all-ages show, then started fooling around with a few new chord patterns. Inspired, I repaired to my studio (ahem, closet) and began throwing parts onto tape (er, the drive). Two hours later, at 12:04, my MacBook Pro crashed and I went for a run.

It was the first, full day of spring. The air was cold and damp, and smelled of a thawing soil. I ran north along Riverside Park. The promenade was crowded with walkers, joggers, bikers and bladers. The George Washington Bridge was clear in the distance.

Some thirty-six hours later, now, I’ve mixed what is likely to be simply an instrumental, “March (Going On April).” Like yesterday’s run — my first in two weeks — the song is an exercise. It’s a simple, sonic experiment to get ideas moving, chords changing, and blood flowing.

To me, it sounds like spring, like the smell of thawing soil, or the sight of the sun peeking around a facade. To me, the song sounds like March going on April.