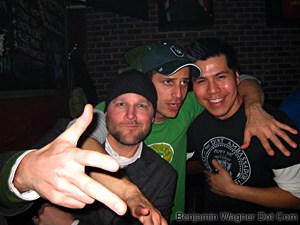 If I remember correctly (and I have a hunch my mother will correct me if I’m wrong), my Grandma (Mildred Lawrence) Bolster’s lineage traces back to Cork County, Ireland.

My grandfather, William Bolster, named his Waterloo, Iowa-based women’s clothier Sweeny’s after his Irish partner. The store’s logo was a bright-green shamrock.

Few places capture the imagination of The Bolster/Wagner Clan like The Emerald Isle. My brother’s been there. My Mom’s been there twice. My Dad visits almost annually. And me? Well, yunno, I like U2 (so much so that Abbi and I have discussed travelling to Dublin for this summer’s U2360 Tour).

Still, anyone who lives or works anywhere near New York City will tell you that there are two nights to avoid in The Big Apple: New Year’s Eve, and St. Patrick’s Day; amateur night, both.

I left work around seven o’clock tonight. Already, Times Square was clogged with revelers clad in green-plastic bowlers, suspenders and Celtics t-shirts. Everyone was hammered.

Which was precisely why Abbi wasn’t terribly interested in getting her Guinness on tonight. So I struck out alone, cranking my favorite Dublin quartet on my iPod as I traipsed toward Lansdowne Bar on Tenth Avenue.

The sidewalk was teaming with The Usual Suspects as I approached, smoke pouring from the sidewalk. Inside was an explosion of kelly green: streamers, lasers and lights. It was scarcely ten o’clock, and already the tables were crowded with dancers, that is, the table tops.

Oddly enough, the back bar was only serving Bud and Bud Light. True enough, I aged up the place by at least eight years. And it was amateur night to be sure: slurred speech, spilled pints, random high fives, couples grinding and mashing in plain sight.

But when the DJ spun “Where The Streets Have No Name,” well… that was good enough for me.

I’ll get there… someday.

Meanwhile, U2 on the stereo, a few pints in my gullet, and a splash of vomit on the sidewalk will have to do.

Editor Note: As predicted, my mother chimed in with significant corrections. “Bolster is the line with the Irish heritage. The Lawrences were English through and through. Catherine Whalen married Garfield Sherman Bolster. Catherine’s mother (Mary Holloway) was from County Carlow; her father (James Whalen) was from County Waterford. Those counties are are a little farther south than Cork; closer to Dublin. Dad’s store was named after Nellie Sweeney who gave him a start in the business, and was like a grandmother to me. The shamrock you remember is on a sweatshirt South Bend. Dad would never have had anything as cheeky as a shamrock on the store a a marquis.” My factual errors notwithstanding, I did, in fact, have a great time drinking beer with Chris, Meg, Tony, et all.