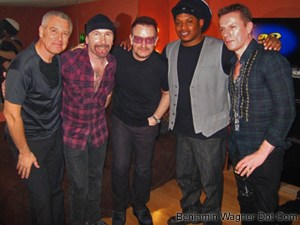 Frankly, my mind had been blown nearly half a dozen times already, and that was before I waltzed past the well-guarded barricades outside the Somerville Theater and bumped into U2 sound checking “Magnificent” just a few feet in front of me.

First, there was getting tapped for the trip to begin with. It happened like this: Sway interviewed the band after its Fordham University gig (with a fair dose of prep from your truly). The band called that same day to request that Sway host one of its three forthcoming Q&A sessions. I have a long-standing policy on not going where I don’t provide value, but finally asserted myself into the equation as a shooter/producer/reporter. Which is how I found myself on the Delta Shuttle with Sway Wednesday afternoon.

Then there was meeting the band’s legendary manager, Paul McGuinness, at lunch. We’d been at the hotel less than an hour. The place was abuzz with the band. The curb was lined with black Escalades, paparazzi and fans. My boss was telling me about the time Kurt interviewed the band on its Zoo TV Tour when he popped out of his chair, greeted Paul, and introduced me. He was wearing black sneakers, black trousers, a black polo short and (you guessed it) a black sportcoat. I stood quietly nodding and smiling as they discussed the band’s chart position (#1 in 30 countries, as it ends up) thinking, “Holy shit, he’s U2’s manager!”

Then there was my sickening race across town (albeit in the back of a Towncar) for HDCam tape stock with just thirty minutes to spare before Boston Camera Rental closed left MTV’s air Bono-less. (I got the tape with time to spare and passed Juliana Hatfield’s old apartment on the way.)

I was dropped off in front of the Somerville Theater around 6:15, which was when mind-blowers number four and five occurred. I was dropped off in front of a Dollar Store Smokey Junglefrog bassist Paul Perreault used to frequent (I purchased a plastic, Jesus-shaped night light there). See, a bunch of my pals — Paul, his brothers Pete and Rob, my friends Christian (“Z”) and Eric — all used to live in Somerville. We recorded Out of Your Head there. So there I was just across the street from the CVS when my life-saving steroids had been ordered on the occasion of The Great Hallucinogenic-Mushroom Bee Sting Incident of 1996 (the day before I met the guy who hired me at MTV, natch). Which is kitty-corner from the Store 24 where we’d pick up munchies on the way back from the T. Except (mind-blower number five) the place was absolutely swarming with well-armed and well-barricaded police, passers-by, satellite trucks and news vans.

Which is when I breezed past the barricades, met my contact, and walked through the front door to see Bono, Edge, Adam and Larry sound checking just a few dozen feet away.

Rehearsal (as I wrote on MTV’s Newsroom Blog) was fairly unbelievable, but also unbelievably normal. The band ran “Maginificent” four times, each time gaining muscle and momentum. Bono refined his gestures, practiced his blocking, tweaked his vocal affectations (landing on a more Middle Eastern-inspired vowel sound), and tossed off a few comedic quips (“I was born… to not smoke”) in the silence between songs (crew, apparently, don’t clap during rehearsal). At one point, Edge even blew the start to “Get On Your Boots.” Later, the track crapped out and stopped the band cold. The guys were workman-like, though, pacing, conferring, blocking and pausing only long enough to take a shared cell phone call.

In the narrow window of time between rehearsal and the actual performance (the audience began filing in the instant the band left the stage), we pulled together Sway’s plan for the global radio broadcast. Most shows take hours of scripting and pre-planning. This one came together in a few minutes on the back of blank note cards. I never saw Sway sweat once.

I shot virtually everything, including exteriors (where Sway and one of Boston’s finest joked about “shooting” U2), crowd b-roll, plus Sway’s stand-up in front of the theater (during which a highly-intoxicated woman tried to weep her way into free tickets), backstage and on-stage tour. When the band finally stormed the tiny stage, I was at the stage door.

I scurried to the back of the house to take in the guy’s brief, blistering set, at one point updating my Facebook status thusly: Benjamin is fucking “Magnificent!” The band performed “Get On Your Boots,” “Magnificent,” “I’ll Go Crazy If I Don’t Go Crazy Tonight,” “Breathe” and and “Vertigo” (read my complete report on U2’s surprise show here), before re-setting the stage for Sway’s Q&A.

Afterwards, I shot the band walking off-stage, then followed them downstairs to the dressing room. We afforded them a few minutes to themselves, then walked inside. Larry (who’d recently injured his neck and was hopped up on pain killers) extinguished a Marlboro Light. Bono applauded Sway and hip-hop hugged him. All four band mates moved in on him as I hovered with my DV cam checking and re-checking that the Record light was illuminated.

“It was an unwieldy event,” Bono told Sway. “But that’s the way we like ’em.”

Once or twice, I peered over the viewfinder to relish the fact that I was just a few inches from Bono, Edge and the guys. Mostly, though, I was pre-occupied with not bumping into any of the guys, and getting the shot. It was oddly out-of-body, as if I wasn’t really there. Moreover, the camera made me invisible. Worse, my duties were relentless. As soon as the interview rapped, I had to run upstairs to grab a dub (remember that HDCam tape?) from the production truck. I never so much as greeted the guys, let alone grabbed a snapshot (you can see a screen shot of the interview below, though; I’m the pixelated guy way in the back wearing a gray skullcap).

By the time I’d snagged my four clips (which you can watch below), the band was shaking hands and signing autographs behind the theater. I strode straight into the fracas on U2’s side of the barricade and shot the guys from just a few feet away. Kids and adults alike were screaming and crying. Bono and Edge rain the entire gauntlet, then stepped into their waiting Esacalde. (In fact, Bono began taping this U2.com video seconds later.) To my surprise, Sway and I climbed in the Escalade just behind, and joined the band’s police-escorted caravan all the way to the Cambridge after party.

It wasn’t until nearly an hour into the soiree that I realized that Bono, Edge, Larry, Adam, one-hundred lucky radio programmers and I were gathered just a few feet from Harvard’s WHRB where, five short years ago, I was hyping my new record, “Love & Other Indoor Games.”

I was back to my hotel room by one a.m. I hit the minibar for a bag of pretzels and a beer, and got down to work, filing two more blog posts and an article plus transferring five digital video clips before packing everything up and heading to the airport.

It was obviously thrilling to have been there, and to have been so close to my favorite band. And I acknowledge how cool it is to be able to walk anywhere at a super-secret, super-intimate U2 show. But I’d be lying if I didn’t tell you it wasn’t a little bit heartbreaking to feel so close, yet so far away.

The sixteen-year-old in me, though, couldn’t believe a second of it. 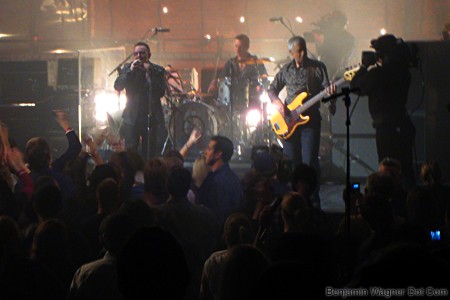 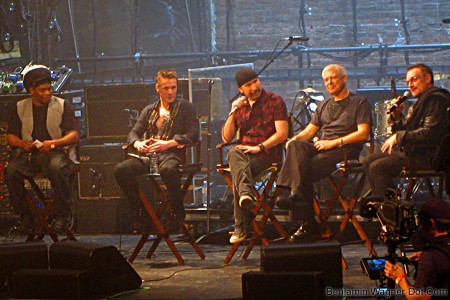 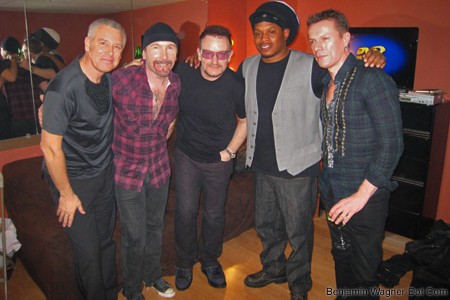 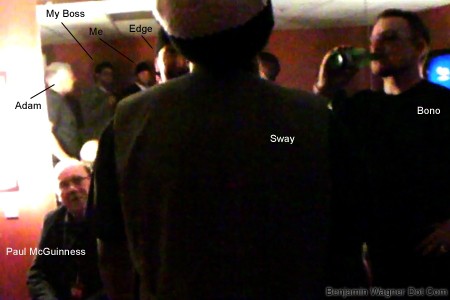