Sweet Carolina (Or, Living In The Fish-Eyed Lens) 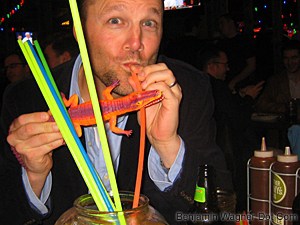 I’ve heard about this sort of thing, but rarely really witnessed it first-hand.

I’m at a bar called Brother Jimmy’s on 31st & Lex. Apparently, Murray Hill is the new post-collegiate neighborhood because everyone looks straight out of Central Casting.

“Jimmy, get me a dozen Zeta Psis and a coupla’ Tri Delts, stat!”

I haven’t seen so many copiously made-up, sweatshirt-wearing teenagers preening, posing, smoking cigarettes and hair-flipping, like, ever! (Well, since college.)

Abbi went to UNC. (She was wearing Carolina Blue running shorts the morning I asked her to marry me). As did her sister, Pembry (also a Tarheel), who has a tradition of watching this particular game here.

Now, I’m not a sports fan, and never really have been (I mean, excepting that I run marathons and triathlons). In fact, I’m pretty sure I’ve never watched a game at a bar. So there’s a component of Anthropology here.

People clap and cheer when their team scores, as if their doing so has any bearing on the outcome.

Also, people wear jerseys to bars. And colors. This strikes me as odd, if for no other reason than poor fashion judgement. But that’s just me; they may say the same about my generic, navy-blue corduroy sport coat and jeans combo (though it’s worth noting I chose Carolina Blue this morning on my wife’s behalf).

I left college sixteen years ago. And frankly, it never meant much to me to begin with. Sports there even less so. I went to three games in four years: a basketball game, a football game, and a lacrosse match. Other than that, it was pretty much studying (3.6, beeyatch!) and rock ‘n roll.

But let’s talk about the guy sitting next to me, tapping his foot rabidly and yelling, “Get up, Blue!” I’m not sure what he means, I just know that he means it.

And let’s talk about the ten-straw, booze and crocodile-filled fish bowl they just delivered (though not before blowing a ref whistle).

So, what are my Anthropology 101 study notes? We are tribes. We respond to ritual. We like rooting for representatives of our tribes. And we like to be distracted from the mundane but anxiety-provoking nature of hunting, gathering, and defending against unseen forces of nature. Now, perhaps, more than ever.