2009 Miami Marathon (Or, Pull The Sunlight Through Me) 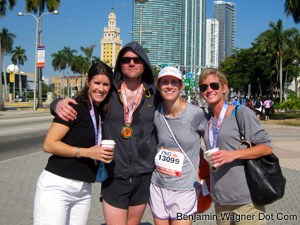 The last time I was on Miami’s Brickell Avenue Bridge, it was midnight.

Hurricane Katrina was lashing the city with crushing wind and stinging rain. Nonetheless, my Video Music Award colleagues and I thought it a lark to stand defiantly mid-span, leaning into the gale drunk like teenagers.

Some five years later, I was mid-span again. This time, though, a different sort of storm raged: a twenty-fifth mile, endorphin-fueled battle between running and stopping, accelerating and collapsing, laughing and weeping.

My road back to downtown Miami began innocently enough. Some months ago, around Thanksgiving, Abbi and her sisters decided to run the Miami Half Marathon together. When at least one significant other signed on for the previously ladies-only trip, I was afforded the option of crashing as well.

“I don’t travel for a half,” I responded half in jest. “But I’ll run the full marathon.”

My ninth New York City Marathon in November had been a breeze. I finished in 4:30:00 with minimal pain and energy to spare. Surely, I figured, I was in sufficient shape to best that time in less than three months time.

Only after registering did I begin to consider the context. I would be training in cold and dry New York City, but running in hot and humid Miami. What with recovering from New York City and ramping up for Miami, I’d be hard pressed for a 20+ mile training run.

Then came the New Year. My new responsibilities at work had me working twelve-hour days, six days a week. Then came Inauguration: eighteen-hour days in bitter cold. I wedged in some great runs through Washington, DC, returned to New York City on Wednesday night, and left for Miami thirty-six hours later.

What the hell was I thinking?

Miami, like Las Vegas, is one of those cities I never expected to visit once, let alone often enough to know my way around. I can only assume Abbi wishes I’d not been there either once as every landmark, it seemed, called for a story.

“See those LED marquees on the arena? We took them over for the VMAs. All MTV News all the time.”

Chalk that non-sequitur up to nervous prattle. It was, after all, five o’clock in the morning. And there we were standing in the dark with 15,000 other runners. Braced for the heat, I was wearing the shortest shorts and skimpiest singlet — both gray — that I could find. Not much to look at to be sure. But then, as I always say, it’s not a fashion show.

The starting gun was a pair of pink fireworks. A cheer went up. Techno began thumping from the PA. And we were off.

The first miles of the race led eastward across MacArthur Causeway, past dozens of massive cruise ships moored at the Port to South Beach. The ten-story ships were parked end-over-end and looked like sets against the inky-black sky. Soon, though, the high rises of South Beach were back lit by the rising sun.

As we turned northward along the coast, the sun broke the waves. It was a welcome but disturbing sight; I was already sweating less than 10k in. Which was roughly when I remembered that I’d forgotten my secret weapon: salt packets.

Sky sky was a fierce blue. The vistas broad, sea-swept and staggering. Still, I spent the first thirteen miles through South Beach and San Marco Island feeling cautiously optimistic, pacing roughly alongside my wife (her sisters long since disappeared). I relished the moment when we marathoners would break free of the half marathoners whose frivolous, chit chat belied the severity of my goal. The real challenge, I knew, would begin somewhere after the eighteenth mile.

Abbi dropped away with a mid-stride kiss at thirteen. I retreated into my thoughts, steeling myself for the fatigue to come. Downtown Miami was boarded up save for a few late-night revelers spilling from an otherwise-sketchy ally.

The remaining runners — the field had been diminished 75% at the half-way mark — ran southward along Bayshore Drive where, the morning after Katrina, I dodged downed trees and power lines. The streets turned quiet past the Miami Zoo and into a neighborhood called Coconut Grove. A few residents had pulled beach chairs along the course, and quietly offering their support. The neighborhood around the Biscayne Bay Yacht Club, by contrast, was flush with a dancing gaggle of apparently-gay men in sailor uniforms and brunching locals who stared apathetically.

I was still running strong, turning in solid nine minute miles. One last surprise remained, though, one I’d relished years prior, but feared as it approached now: The Rickenbacker Causeway.

On that same fateful VMA Weekend back in September 2005, The Rickenbacker Causeway was a concrete miracle connecting my pre-show anxieties with a refreshing, early-morning duathlon. I’ll never forget slipping into Biscayne Bay, floating on my back in the clear, cool aquamarine, and forgetting a moment the gathering network television storm.

This day, in contrast, found the place less forgiving. Twenty-three miles in, my quads had been pounded into something approaching muscle nausea. The mid-morning sun beat down relentlessly, and the black pavement radiated it back. Traffic was stopped up both ways, some honking, some cheering, most ignoring, and all throwing off heat like a furnace. My arms were riddled with goose bumps, a sure sign of dehydration. Worse, I was nearly out of tricks. I’d already taken my trust Mile 20 Advil. But I’d forgotten salt packets and gum. And was down to just four jelly beans.

Downtown Miami is littered with modern, mirrored skyscrapers, many with odd shapes and some with holes in the middle (better aerodynamics for hurricanes?). Today, they were lined with spectators — finally, spectators — raucously encouraging us on. Despite my dehydration, muscle exhaustion, and a few prime hot spots (read: blisters) on my feet, I was accelerating still, passing souls more-spent. I dumped a cup of water over my head (“That’ll get you across the finish!” a woman shouted), and calculated my best possible time. Sub-four was out of reach, and so I imagined Abbi cheering at the finish, and set my sites on getting in below 4:10.

Which is when I spotted the Brickell Avenue Bridge ahead in the distance. It’s iron-grated span — no more than 100 yards across and 15 degrees in slope — mocked me like an urban Everest. I leaned into it, spread my toes against the wide grate, and remembered myself there all those years ago: beer in hand, shirt open to the gale, laughing in the face of the storm.

Turning right along Biscayne Boulevard, the crowd grew more dense. I dug in deeper still, biting my tongue and slicing at the air like Rocky. The finish was just around the corner. A racer just before me waved his arms to prompt cheers from the stands. I pushed harder yet, past him, past others, past the point where I wasn’t sure whether I’d vomit, collapse, or lose my heart right out of my chest. I crossed the finish line beneath a blistering, white-hot Miami sun in 4:08:04.

I was soaked, panting violently, and deathly-serious as a volunteer slipped my medal over my head.

Which may explain why, less than twenty-four hours after swearing I’d only run one more marathon — November will mark my tenth New York City Marathon in a row — I’m already plotting my twelfth. 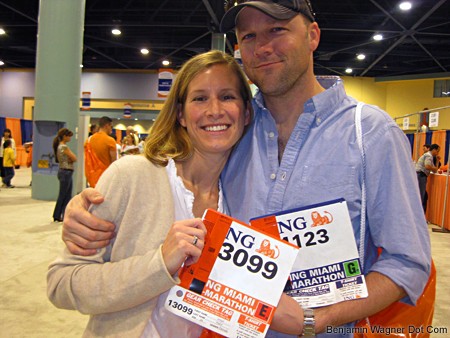 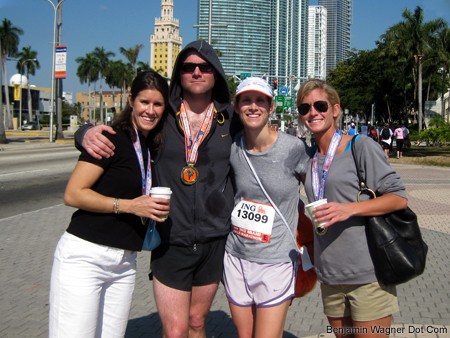