Let other people write about yesterday’s other big first; without diminishing the historical significance of Barack Obama’s inauguration as the first-ever African-American president, race wasn’t what reduced me to a sobbing mess.

And so, as he spoke, a smile spread across my face, tears rumbled down my cheeks, and I felt a cold, hard lump of cynicism melt inside me.

I was standing with my back just feet from The Washington Monument. The sound of the flags flapping at its base rose and fell with the breeze, mixing with amplified strains of the Army band, idle chatter from every nationality, helicopters and jets.

Through the dusty distance, I could see the gleaming white steps of the Capitol draped in its red, white and blue bunting. I could just make out the podium.

The crowd was dense, so much so that I was warm despite the twenty degree weather. Were I to stumble, I’d never have hit the ground. (Which somehow seems the whole point of America.)

Great, sweeping jet contrails drifted frozen overhead, as if fighters had been circling. A pair of silhouettes stood atop the American History Museum.

A long shot tracked the then president elect’s motorcade, and I felt tears rise from somewhere deep within.

I hype my Iowa roots, but the truth is that my family moved just east of Washington, DC, to Waldorf, Maryland, when I was just three weeks old. Some of my earliest memories took place on The National Mall: the red-brick Smithsonian tower, the Air & Space Museum, the reflecting pool. I’ve always had a sense of awe and scale there, though years of government mismanagement and malaise and my own institutional distrust led me to be highly suspect of the place, and the people who aspired to be there. Still, I was raised with a healthy respect for (tempered by my more recent suspicion of) our fair republic.

As for race, my parents raised us to be as understand our nation’s history and challenge, but endeavored at every turn to expose us to and encourage us towards diversity. Moreover, they were civically minded: joining movements, marching on The Capitol. And when we moved to Chicago in 1978, they chose the suburb of Oak Park specifically for its sense of diversity and inclusion. Not bad for a couple of kids from Iowa. So I’m no more perfect than the rest of the country, but race never factored into my judgements or relationships any more than gender or sexual persuasion.

And so, as my support of candidate Barack Obama increased, and as the groundswell of consensus behind this apparently reasoned and dignified man grew, I didn’t consider race. I was impressed by the man: his intelligence, temperament, and warmth.

Today, neither the chill, the absurdity of the chants, nor the populace of the cheap seats could temped my enthusiasm. Standing there amidst the partisan boos and jeers of the sophomoric great unwashed (“Nah nah nah nah” when George Bush appeared? Really), I was moved.

Because for me, the historical moment was only partially about race. That President Barack Obama looks like my multihued America is a crucial point (and one he acknowledged eloquently: “For we know that our patchwork heritage is a strength, not a weakness.”) But it’s not the only point.

He began damage control for the last eight years of global bullying when he said, “America is a friend of each nation and every man, woman, and child who seeks a future of peace and dignity,” and assured the world “We are ready to lead once more.”

He signaled a new religious tolerance, stating, “We are a nation of Christians and Muslims, Jews and Hindus, and non-believers.” Non-believers! Awesome.

What made President Barack Obama’s inaugural address feel like an true American Moment, though, was its insistence on citizenship. “The time has come to set aside childish things,” he said. Grow up, take responsibility for our institutions and actions. We must “choose our better history.”

In the end, what made President Barack Obama’s inaugural address so moving was no just its hope, but its tenacious optimism. There is an ownership to it. The President did not promise single-handed solutions. The message was not “Consume,” it was “Do something!”

“America,” he said. “In the face of our common dangers, in this winter of our hardship, let us remember these timeless words. With hope and virtue, let us brave once more the icy currents, and endure what storms may come. Let it be said by our children’s children that when we were tested we refused to let this journey end, that we did not turn back nor did we falter; and with eyes fixed on the horizon and God’s grace upon us, we carried forth that great gift of freedom and delivered it safely to future generations.”

I didn’t know it until I felt it, but something inside had frozen in me: the student council vice-president, the volunteer, the faithful believer.

These few days Washington, DC, and today’s rousing speech, though, stirred in me something essential: optimism, enthusiasm, confidence. There are risks in those feelings; I could be disappointed all over again. For now, though, it feels good to feel this way. It feels good to believe in my potential to choose my better history.

It feels even better to believe in all of ours. 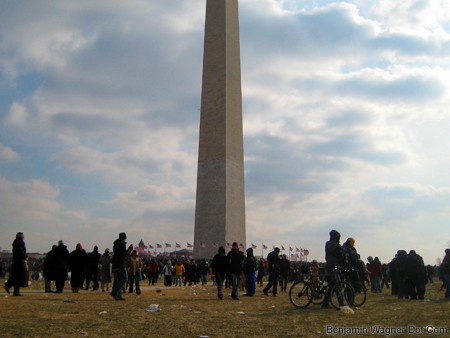