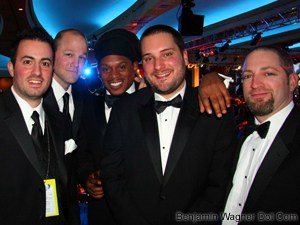 I am wedged between a mass of angry, frustrated and anxious Presidential Youth Ball attendees and a phalanx of Police and Secret Service in the Washington, DC, Hilton.

With the ballroom at capacity, and POTUS on his way, the men in black are immovable. I reluctantly pull out every item I possess in my defense, but neither my name, title, business card nor MTV ID have a bearing.

I text a colleague, Ryan, who’s producing MTV’s Youth Ball inside. “Dude, you gotta pull me in.”

“I’ll grab you when we move Rosario from the Lounge to the Ballroom.”

Minutes pass. And then, out of the corner of my eye, I see Ryan, Rosario Dawson streaking across an empty patch of mustard-colored carpet. I tap him on the shoulder, and lock arms with him.

We logjam behind a gaggle of angry, sobbing kids. “Oh sure,” they yell at the authorities, “Let THEM in.” Shouting ensues. The authorities refuse us admittance. The kids refuse the budge. An MTV producer pokes out from behind the door, pointing at Rosario.

“We need her on NOW!” he yells, reaching out to her.

He takes her hand and pulls her through the crowd as Secret Service yells, “Only her!” The floor producer yells, “Ryan too,” and pulls him through.

I struggle to follow, pulled forward by Ryan while restrained by the crestfallen, angry kids. Ryan looks back. The Floor Producer yells, “Him!” And I break through the bodies into the wide-open, soft-blue ballroom. I follow Ryan to our home base, where Rosario greets Ashton Kutcher and Demi Moore. My colleague, Garth, repeats what he’s heard on his headset.

Moments later, President Barack Obama and The First Lady emerge to the strains of “Hail to the Chief.” Ashton, Demi, Tobey McGuire, Kid Rock, Usher and Sway hoist their iPhones in the air like the hundreds of screaming kids on the floor.

The President smiles. Michelle waves. And he speaks.

“I’ve been looking forward to this ball for quite some time,” our new president says. “What started out as an improbable journey when nobody gave us a chance was carried forward, was inspired by, was energized by young people all across America,”

I choke up, grinning, and grateful.