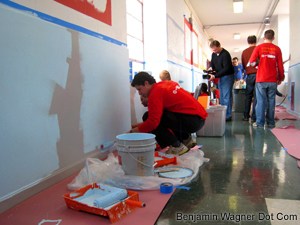 I haven’t stepped foot in a high school in years. And for good reason; they’re large, generic, often sterile and sometimes impenetrable institutions — to say nothing of their inordinately soul-crushing social pressures.

Fitting, then, that I should return to high school today — Martin Luther King Jr. Day — for a general civics lesson and refresher course on inspiration.

The school was Ballou Senior High School in Washington, DC’s southernmost neighborhoods. The event was ServiceNation’s “New Era of Service” breakfast. The morning kicked off a day of service culminating a volunteer efforts at Simon Elementary School down the street.

Lewis, who first came to DC in 1961 the year Barack Obama was born to participate in the Freedom Ride, encouraged us in soaring, Baptist tones to “Find a way to get in the way.”

“Do what you can,” he said, “To make our country what it should be.”

King reminded us that “the Constitution and Declaration are promissory notes.”

The marching band played. The mayor spoke. The first grade sang “My Country ‘Tis Of Thee.” And then people got down to work renovating the library and painting the hallways.

The cynic in me blanched at the corporate sponsorship (including ours), the celebrity photo ops, and the saccharine, election-cycle sloganeering. But as we drove back towards The Capitol, the student council-oriented optimist prevailed. I shook off years of skepticism, and — for the moment, anyway — chose the converse.

Because, where I come from, optimism is neither safe, nor politic, nor popular.

But it is right.