Come On Up For The Rising 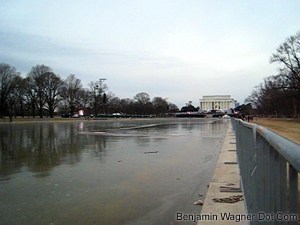 It took less than an hour for my inaugural cynicism to fade.

It wasn’t the bunting, the banners, or the red, white and blue. It wasn’t The Mall, the monuments, or the museums. It wasn’t even hope, change, or unity.

My colleague, Gil, and I were walking off lunch with a long stroll through the capital. We walked the parade route past The White House, then climbed a short hill to The Washington Monument. The Capital Building glistened white against the bright, blue sky to the east. Dozens of American flags flapped in the brisk, frigid wind. Children scurried into photos, giggling against the chill.

Lincoln sat patient and poised to the east, stoic in the face of things. We heard music from his feet, and pointed ourselves toward the The Reflecting Pool. As we walked quietly, I wistfully recalled two photos: Martin Luther King, Jr. giving his “I Have A Dream” speech, and my six-year-old brother sailing a small, hand-built wooden boat.

Which is when I heard the unmistakably hoarse growl of one Bruce Frederick Joseph Springsteen booming across those frozen waters.

I paused, slack jawed, then doubled my pace towards the base of The Lincoln Memorial. There, in mirrored Foster Grants, a navy-blu pea coat, red bandana and jeans, Bruce rehearsed his “We Are One” concert contribution. A gospel chorus backed the refrain.

Afterwards, he told the choir, “Great job!” before joking under his breath, “My ass is cold!”

Gil and I pressed on, rounding the back of the memorial for a look at The Potomac. As we approached Rock Creek Parkway, a pair of black SUVs approached.

Seconds later, The Edge stepped from the vehicle. Bono followed close behind, wearing his trademark blue-tinted glasses, and an epaulet-laden, brass-buttoned military jacket. He smiled, and slid slowly past. I stood motionless.

As we strode away, Pete Seeger and Bruce were rehearsing “This Land Is Your Land.” And for a second there, it felt like it.