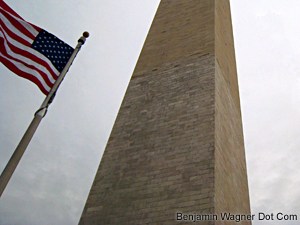 The clock reads 5:56. The sky is purplish-black behind the blinds. I blink the sleep out of my eyes, climb out of bed, stumble into the living room, and turn on the television. NY1 reads eight degrees.

I shave my head, shower, jam five days worth of dress shirts, underwear and aspirin into my bag. I pull on my pea coat, hat and gloves, kiss Abbi goodbye three times, and walk out the door.

My face is straight. My body is tired. And my stomach is unsettled.

I am on my way to Washington, DC, for the inauguration of Barack Obama, and I cannot be less enthused.

Ninth Avenue is empty, the pavement bleached gray from winter. The wind finds every seam in my jacket, slicing across my torso. I hail a cab (“Cold out there, huh?”), and am whisked to Penn Station in minutes.

Stephen Colbert is in line behind me at Starbucks. Rob Riggle passes me in the dusty, fluorescent-lit halls.

Amtrak #153 is delayed. I lay in wait at my usual spot, just downstairs from the big board. When the track finally posts, I scramble with a dozen other Amtrak Ninjas. We descend to find empty tracks, and scramble again (“Don’t run,” I remind myself) before finding our train. I settle in on the east side, and wait.

We lurch forward into the darkness, then break into a bright, Meadowland daybreak.

Which is why I’m unenthused.

It’s not Barack. I’m a fan. I’m psyched. I’m hopeful (with a dash of restraint). I’m psyched the country made a smart choice for only the second time in my life. Or, more succinctly, for the first time in its history.

It’s the hullabaloo. The hassle. The havok.

I have a packet twenty-pages deep of official PIC (Presidential Inaugural Committe) and unsanctioned events: breakfasts, brunches, lunches, cocktails, dinners, receptions, openings, performances, symposiums, red carpets, dance parties and raves. All of which are brought to you by Pepsi, CK1, The Huffington Post and Hardees.

Worse, it’s Hollywood on The Patomic. Leonardo DiCaprio, Usher, Spike Lee, Puff Daddy, Miley Cyrus, Cameron Diaz and a laundry list of A, B and C-listers are all descending on DC to brush up against this luminous, pristine administration..

This amidst the most convoluted, bureaucratic, secure, production-intensive environment ever. No umbrellas or baby strollers or access.

And it’s eight degrees outside.

So while I am more than eager to turn the page on a nasty little chapter in American history, and while I acknowledge that my proximity to this historical moment is privileged, I would prefer to do so from the comfort of my brown, velvet couch with my lovely wife at my side.

Ours is a dark season. The days are short and cold. The economy is sputtering a wheezing. The world is in turmoil. And it all whizzed past in a blur, trying as we do, to capture it with our thumbs and three inch screens.

Our President challenges us, though, to be audacious. He dares us to be optimistic.

And so, as Amtrak #153 glides into Union Station, I will endeavor to take that dare, to rise to that occassion, to stare down the hullabaloo, hassle, havok.

The sun is out. The sky is blue. The day is still new.