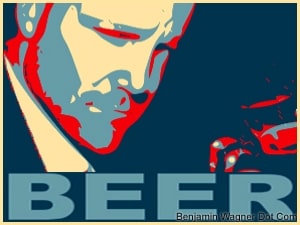 It was 2:44 p.m., just shy of an hour before USAir flight 1549 slid into the Hudson River a few blocks west of my office.

I was sitting at my desk, celebrating the few minutes I had between meetings by blowing email out of my inbox like Missile Command.

“Attached are the last eight days of metrics,” I typed. “I’ve pasted highlights below.”

Behind me to the east, the cold, winter light was fading over Midtown.

“Premium’s fine with us,” I wrote. “Seems to me to be dependent on Tech.”

I was barely half-way through the day, and already the specter of this weekend’s massive inauguration coverage was looming like a tornado over a Kansas trailer park. My head was swimming with logistics, hurdles, and worst-case scenarios. I needed to think about something else. So I sent Chris Abad an email.

Yo! What are you up to after work? Wanna grab a beer? No agenda; I’m just thirsty.

I stepped into Times Square around eight o’clock. Broadway was brushed pale gray. ABC’s JumboTron read just 15°. I popped the collar on my pea coat, dialed up my dad, and leaned into the wind. We talked as I walked up Eighth Avenue.

Chris, who was walking his dog, Riley, spotted me as I turned west on 56th Street. We dropped Riley upstairs, then struggled through the cold to Bar 9. The bar was half-full. The jukebox was silent. We found a booth in the back, and settled in.

Every time the waitress returned, I deferred to Chris.

Which was appreciated, because I was thirsty.