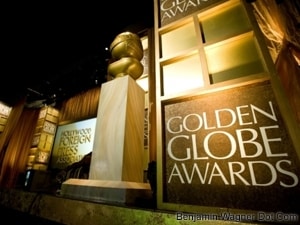 Just watching the red carpet of the 66th Annual Hollywood Foreign Press Association’s Golden Globe Awards stressed me out. T-minus four months until we’re all up in the MTV Movie Awards, and seven until the Video Music Awards.

Tonight, though, I’m on the couch keeping on eye on MTV News’ terrific online coverage, and NBC’s middling effort on air.

If you’ve read my Oscar or Grammy live blogs, you know I’m not that funny. Still, here are some random notes…

8:03 – Cameron Diaz was just over Penelope Cruz’s shoulder as they cycled through the Supporting Actress nominees and I though, “Life really is like the high school lunch room.”

8:08 – Peter Gabriel’s at the Golden Globes? Wow, he looks uncomfortable.

8:09 – Does the sound of silverware on plates ever subside in the show?

8:10 – Bruuuuuuuuuuuce! “Mickey calledand said ‘Some people invest themselves in pain instead of the things that matter in life. This guy isn’t one of them’ And I said, “I know a few guys like that.” I love how Bruce’s speeches all begin with a story. Bruce rules.

8:20 – I nearly set the kitchen on fire just now. I’m making rice, so was boiling water and managed to boil it all off. Pot was empty on the burner when I walked in. Oops. No fire alarms. All’s well. Crisis averted.

8:37 – You know it was gonna’ be good when Ricky Gervais walked on stage with as pint in hand! “That’s the last time I sleep with two hundred foreign journalists.” Genius! Highlight so far.

8:39 – The Jonas Brothers. Every network programmer thinks that if Miley and The Jonas Brothers run the place through, the kids’ll watch. I’m not so sure. Though I do kinda’ dig Kevin’s velvet tux. That is Kevin, right?

8:43 – You can tell there was no coordination between the guy who tallied the winners, and the guy who did the seating arrangements when someone like Sally Hawkins has to hoof it from the back of the room. Oooh! And we’re now applauding tears! We love sentiment.

8:53 – I just delivered dinner to my wife’s lap (she’s knitting on the carpet next to me). Rice turned out fine. As did the chicken and green beans. Enjoy.

9:02 – “All these power players in one room. There’s no scene like The Golden Globes.” Oh, Hollywood.

9:09 – Um, Maggie Gyllenhaal? Mutual of Omaha called. They need their drapes back.

9:22 – “And The Golden Globes goes to…” the only dude in the Beverly Hilton who I’ve seen step out of a cab on East 79th Street.

9:33 – So I guess J Lo and Marc Anthony are still a go. You see that canoodling?

9:37 – Tracy Morgan, new highlight. “Tina and I agreed that if Barack Obama won, I’d be the new face of the show!” Classic. “So props to our man, Lorny Lorn!” And then Baldwin whispers in his ear, apparently reminding him to thank the head of the network, “And my man, Jeff Zucker.” Cut to Zucker, slouched in his chair.

9:44 – I got nothin’ against Diddy, but I think it’s time he loses that little tuft of beard on his chin.

9:55 – Wow, someone had to shush the audience for Scorsese. F’d up. (But then Scorsese says, “I stand amazed at his constant skill … I marvel at his ability to conjure … images that are genuinely transcendent.” Did he see “The Kingdom Of The Crystal Skulls”?)

10:17 – I don’t get it. When I move my eyes, my forehead moves. What’s wrong with these Hollywood actresses? Their foreheads don’t move.

10:18 – Dear Sandra Bullock, Not so much with the dress. But nice pronunciation of Barcelona!

10:53 – First, Mickey Rourke trips on the first step of the Golden Globe stage. Then Darren Aronofsky flips him off. Then Rourke says “balls” a second time and thanks his dogs… Cue the music! Wow. Guess I gotta see that flick.