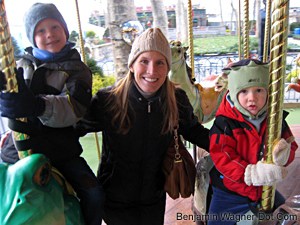 On the street, Edward refused to take my hand, issuing a long, withdrawn, “Nooooooooooo!” So I carried him.

On the subway platform, the roar of the trains scared him. So I held him, whispering, “I won’t let anything happen to you, I promise.”

Abbi and I took Ethan and Edward for a few, long hours this afternoon. Eighty blocks, four subways, three historic buildings, two carousel rides and one gift shop were more than enough. The boys were mostly adorable, to be sure. But the pressure was immense. Everything was a threat.

Blackberry-wielding pedestrians careened blithely down the sidewalk. Drunks staggered recklessly across our path. Buses hissed. Fire engines screamed. Taxis raced. At Grand Central Station, the flurry of tourists and commuters left me so rattled, I clung to Ethan’s hand tightly.

“Uncle Benjamin,” he said, “You’re holding my hand too tight.”

At the MTA Transit Museum, Abbi told the boys they could each pick a toy train. Edward quickly settled on a blue locomotive, “Like Thomas!” Ethan, though, wandered the store pawing nearly every item.

We paced every inch of Grand Central looking for one, before heading toward the New York Public Library.

“Wait ’til you see the lions out front!” I said.

We visited the lions, walked through Bryant Park, then rode the carousel. They boys rocked and swayed on their horses, smiling for my camera and singing “Macaroni and cheese!” As the ride slowed Edward said quietly, “I want to do it again.” So we did. When it slowed again he said more loudly, “I want to do it again.” A few dozen feet from the carousel, he stopped crying, “Nooooooooooo!”

When he spotted a 42d Street JumboTron pulsing with full-color, life-sized fireworks, he exclaimed, “Fi-a-werks!!!”

At the Times Square subway station, he danced while a smiling, gray-bearded man played “Ode To Joy” on steel drums. I handed Ethan a dollar to slip into the man’s hat. The subway rumbled into the station. I held Edward in my arms all the way home.

When we climbed out of the 79th Street subway, Ethan said, “Essentials has toys.” And so, in the name of fraternal equity, we climbed the stairs to the toy section to look for a diesel locomotive. When we couldn’t find one, he began grabbing random toys. “I want this,” he’d say before putting it down, picking up another, and repeating the mantra.

I said no, but promised that we’d find him one next weekend. Which is when his bottom lip began to quiver. Back home with his parents, he tossed me under the bus the second we walked in the door.

As we walked towards home (detouring for a late-afternoon beer), I said to Abbi, “I’m not sure I’m ready for this.”

They’re kids. I know they don’t mean anything by the tantrums, pouting or defiance. Still, I’m not used to it. I’m not used to to how quickly they turn, or how badly it hurts.

We passed a young couple pushing a stroller across 72d Street. The woman looked tired, sullen, her eyes sunken.

I love those boys like crazy. They’re adorable, and brilliant. And I want to be a father myself someday. I know it’s worth it: the shouting for the giggles, the tears for the wide-eyed enthusiasm.

I’ll get used to it.