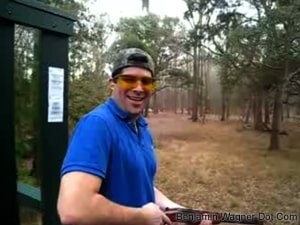 I was never much with a shotgun growing up.

Not that I had a ton of exposure to firearms, but they were around. My father’s family, most of whom still live in Waterloo, Iowa, frequently spent weekends hunting pheasant, duck, rabbit and deer. Invariably, they’d let me tag along on a hunt, even if I did get squeamish when someone actually shot a living thing. And somewhere along the cold, tedious walk through some frigid, Midwestern field, someone would set up a few tin cans, position that shotgun in my arms, and laugh as the recoil tossed my tiny little body backwards into the snow.

Somewhere along the way, Christofer smuggled a pellet gun into our suburban Philadelphia home, and took it upon himself to eradicate the squirrel population in and around 416 Conestoga Road. At one point, some poor little rodent’s tail hung from the rear view mirror of his brown, wood-panelled Oldsmobile Cutlass Cruiser. (This would be roughly concurrent to the arrival of chewing tobacco between his cheek and gum. Classy!)

I’ve taken but one life with a gun: a dainty, fire-engine red cardinal who had the misfortune of chirping innocently just outside Jay Reynold’s window as he and I scanned the neighborhood for a target. We buried the poor soul in a wordless ceremony in Jay’s backyard. A few hours later, I was sobbing uncontrollably to my mother, “I didn’t think we would kill it!?!” I’ve had a healthy respect for guns ever since.

When I first learned that there was a sporting clay course near Abbi’s parent’s home on Bray’s Island, then, I grew a bit concerned. Not only was I fully convinced that the shotgun would explode in my face, I was certain I couldn’t hit a clay pigeon if I tried. That Abbi nailed her first only added insult to the injury I expected whence — heart pounding, palms sweating — I pulled the trigger myself moments later.

Alas, the barrel didn’t backfire in my face. I even managed to shatter a few clays. What’s more, I’ve come to look forward to my twice annual visit to the Bray’s sporting clay range. I’ve even gotten a little cocky, talkin’ smack with Abbi’s father, Richard, and sister’s boyfriend, Pedro. Unfounded smack, as it ends up.

Yesterday found me shamed six stations into the range with nary a tally to my name. No hits. No smack talk.

At some point, though, Richard mentioned “leading the bird,” and I started heating up. A few stations later, Pedro and I were nearly neck and neck. The loser was pledged to do the night’s dishes. Pressure was on. Cameras were rolling. Which is when this happened.

It’s arguable that one shouldn’t be laughing so hard when firearms are in play. As it ends up, Pedro’s “rookie move” — an unreleased safety — had befallen me just a few stands prior. And his sudden, miraculous and definitive bulls eye had tied him up for the lead.

In fact, in the end, Pedro had the last laugh; I did the dishes.