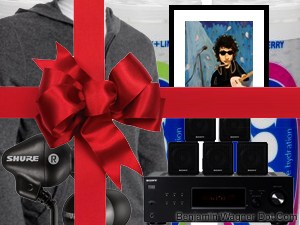 My pal Ron Lieber writes the “Your Money” column for The New York Times. It’s a great gig for a smart guy, especially for these trying times.

Ron periodically canvasses his “e-mail focus group” for feedback and insight on his ideas. Last week, for example, he inquired after first-time house buyers. A few weeks ago, he inquired thusly about the frenzied gift giving season:

I’m wearying of the search for the right gift for a double digit (and growing) number of family members each year. Even more than worrying about spending the money, which is in shorter supply for lots of people right now, I’d rather spend my increasingly limited spare time hanging out with those closest to me than using that time to shop for each one of them, you know?

You, however, may have better ideas (or improvements to mine), or may find meaning in the gift hunt that I don’t. I’d love to hear what you’re thinking and what your family does. Also, has the economic situation changed your feelings about any of this?

Being that a) my parents are divorced and b) I’m married, I’m part of a few different families with a few different approaches. Some gift as they wish to receive. And some gift at (apparent) random. But my favorite is the old-fashioned list.

Sure, it’s a little less exciting for Abbi to open something for which she asked, but it beats her opening something she doesn’t like and faking it. In terms of receiving, the holidays are one of two times a year where I don’t have to do something for myself. Even if it’s something I would do for myself (I ask for things like sweaters and running gear; stuff I need, nothing too crazy), the whole transaction is lighter when someone else is doing it for you. A list is less serendipitous, and maybe a tony bit less meaningful, but also less risky. There’s still an element of surprise and levity, but not that embarassment of “Ohhh… this. Gee… thanks.”

To your question of the meaning of it all, though, our now-annual “Holiday Benefit” cd/show is the very best of the season. Because to me — despite what I’ve said above about getting stuff — the spirit of Christmas to me is one of unconditional giving, of going beyond one’s self, of looking out for each other. That’s what the benefit does. It’s about community, and charity, and joy, song and light.

So what do I want for Christmas this year? Thanks for asking. Here’s my list — meaningless and meaningful, perhaps, in equal turns.

Framed/Matted I Love This Song Print by Exploding Dog

Framed/Matted I Like This Music Print by Exploding Dog

“When I Grow Up” by Juliana Hatfield

“But Enough About Me” by Jancee Dunn

For the record, if you could toss World Peace, Economic Prosperity and Social Equality, that’d be cool.

And if you’re still feeling gracious after all that, I’d still like to be on the cover of Rolling Stone Magazine.