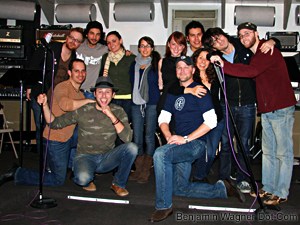 My primary assignment was bartender, but I also played the role of backing vocalist, reporter, photographer and tambourinist.

I spent most of the night running back and forth to the corner store (a fairly sketchy one, it’s worth noting, there on the corner of 30th & Eighth) for Budweiser Tall Boys. Oh, and drinking them. I helped with that too.

Also, I’m MCing Monday night’s show with Rebel Music Spirit founder, Deena Goodman, so I also did some reporting, getting the basics on each artist so I can give each a proper introduction. Amber Rubarth, for example, was once a chainsaw wood sculptor. Rosi Golan was born in Israel. All sorts of interesting things.

Plus, I took lots of rehearsal photos.

It’s an excellent collection of musicians, and a great group of people. I’m glad we had this extra time together to come together even more cohesively as a group. Which sounds really clinical. What I mean is, we had a blast. There’s nothing like a few songs, a few beers, and a few laughs to bring a bunch of people together. At one point, I turned to Deena and said, “I’ve been waiting for this for twenty years!”

The fun really began at the after party at our favorite dive, Tempest Bar where — after four hours of rehearsal — Tony, Chris, Jamie, Bryan and I finally exhaled.