Live Forever For You (Or, How I Stopped Worrying And Learned To Love The Smart Bomb) 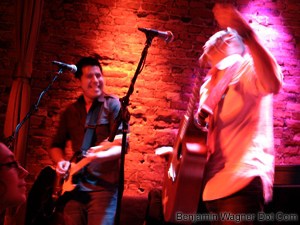 At 7:16pm Wednesday night, I was working on a PowerPoint presentation entitled, “The Smart Bomb,” a very serious, very substantive, 16-page strategic document.

At 7:17, the butterflies in my stomach overtook the synapses in my brain’s ability to make any further Q4 projections. There was a rock show to be had.

Less than two hours later — having raced home, microwaved a frozen pizza, packed my guitar, hit the ATM, met Chris, hailed a cab and raced downtown to Rockwood Music Hall (and exchanging a record twenty-six emails with my “A Holiday Benefit, Vol. II” colleagues Dean McCarthy and Deena Goodman in-between) — I was standing on a stage, strumming a guitar and singing.

There was scarcely enough time to worry. Which is fortunate; I’m good at worrying. And a fair dose or worrying can torpedo a show.

I’m not sure it was the distraction of the PowerPoint, or the specter of presenting it first thing this morning (and again this afternoon), but last night’s “Live At Rockwood Music Hall” record release show was one of our best ever.

Now, I’ve played a lot of shows. And a lot of the time, I’m uncomfortable up there, second-guessing every note and chord. Not last night, though. I was milking every note. It was like I was riding a wave or something. I knew I had some bearing on the outcome, but mostly, I was a guest in my own body.

It was pretty awesome.

In fact, the last chord I played was a G (an oft-used favorite). Never in my nineteen years of playing guitar have I ever played each string so slowly, letting each ring out as I leaned back into the light relishing a moment I didn’t want to end.

Why did it go so well? Well, I’m not sure. Lucky, I guess. Well-rehearsed, maybe. Surrounded by terrific musicians, absolutely. Mostly, though, I didn’t have time to worry. I just let go.

And here’s the thing that dawned as we were performing “Live Forever.”

I love music because it makes me feel like crying, dancing, and smiling. It makes me my heart feel full. I love making music for the same reasons. But I got into making music for different reasons. I liked the applause. I loved the applause. No, I needed the applause as some sort of evidence that I don’t suck. At some point in the last few years, though, it struck me that rock ‘n roll is a zero sum game; I knew there had to be another way, another reason. But I didn’t know why. Which made its way into a song.

I wrote “Live Forever” in 2003, just a few hours after seeing Oasis perform at Radio City Music Hall. I was going for a simple, four-chord stomper, and I ended up with some kinda’ cool, kinda’ resigned-but-resolved lyrics (“There nothing left here to do / But live forever for you”), but I had no idea what I was writing about.

The best part of last night? Making something live, on-the-spot, together and in-public with Chris, Tony, and Jamie. Hanging out with Christofer, Mark and Patrick, Nick and Amanda, Abbi, Pembry, Bethany and Jon, Casey and Jim and Jordan and all of my friends and family — making a moment with them, together.

That’s what’s “greater than the sound of applause,” right? Love and laughter, and the things that we make when we make things together.

There are no formulas for that, no projections or pie charts. Just leaning back, letting go, and letting the light shine on all of us.