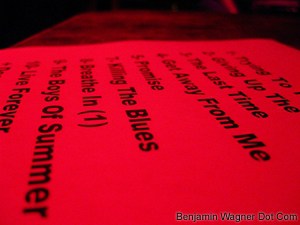 In physics, “observer effect” refers to changes that the act of observation will make on the phenomenon being observed. The rule applies to rock shows.

Remember those junior high school plays? Ever dig that VHS tape your parent’s recorded out of the basement? The show were better in your memories, right?

Well, way back in the ’90s, my brother, Christofer, video taped almost every one of my shows. It may have been the tiny microphone on the camera, or that I was a terrible performer. Either way, watching those game tapes was painful. Whether I knew tape was rolling or not, my voice never sounded like I thought. My postures weren’t nearly rockin’ enough.

So I asked Chris to stop taping. And all that was left of any given rock show was a few photos, and (usually) a hangover. Which was fine by me.

I started taping again last spring thinking maybe I’d release a live record or two. A few years ago, one of my favorite bands, Guster and Pearl Jame, had recorded every show. Surely, I reasoned, I could get one good one.

I always knew when Ken Rockwood was rolling tape (or running ProTools, as it were). Sometimes, in the middle of a great performance (one where I hit all my notes, and didn’t stomp on the wrong chord), I would think, ‘Don’t screw it up!’ And then, usually, I’d screw it up.

Sure enough, the best performances were the ones I didn’t tape. “The Invention Of Everything Else” CD release, in particular, was stellar, but tape-free. Accordingly, the resulting record, “Live At Rockwood Music Hall,” isn’t perfect. The only way to approach perfection is to lock yourself into a room and do it over and over and over again.

Rock shows are temporal. They’re all about the moment. They’re the whole thing: the weather, the news, the mood, the booze. Rock shows are about the amplification, the lights, the fashion, and the crowd. And they’re probably better left in the moment.

So why am I releasing a live album next week? Well, not because it’s perfect.

For starters, I love a good project. Culling through a few dozen songs to find the best version is fun. Mastering tracks is fun. Picking album art is fun.

Moreover, though, I’m pretty sure I’m not getting much better at this. I mean, let’s be honest: I used to play 25-30 shows a year. Now I’m lucky for ten. I used to rehearse weekly. Now it’s once or twice before a show. Luckily, I’m playing with the best bunch of guys with whom I’ve ever performed. So this seemed like as good a moment as any.

It turned out well enough, I think. The new, online-only LP is available in 8-song iTunes, or 10-song Authentic Records’ versions, and will be available next Wednesday, November 19. Come hear for yourself. Be a part of the moment, and — invariably — you can help change it.