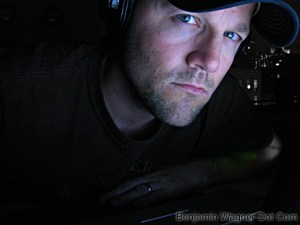 I’ve spent a lot of time recording, but I’m pretty sure this one takes the cake: thirteen months of studio time for two minutes and three seconds of song.

Because the thing is, stakes are high for my recording of Elvis’ “Blue Christmas” for “A Holiday Benefit, Vol. II.”

I mean, duh, it’s an Elvis song. Hate to screw that up.

And like I told Chris Abad when he came by to track his guitar solo for the second time this afternoon (it was great the first; I’m just obsessive), “If you hadn’t banged out such an amazing version of ‘Last Christmas’ for the benefit, we’d have been done with this sucker long ago.'”

Which gets at my point, but isn’t the point.

Point is, when your rock band pals — drum set and all, for cryin’ out loud — jam themselves into your 4×10, walk-in closet on a sunny afternoon, then come back time and time again to overdub parts that you hum to ’em, well, you wanna’ get that shit right for them.

Similarly, when your amazingly-talented singer/songwriter friend does you a solid twice, squeezing you into a schedule full of voice lessons, commercial v.o. sessions and rehearsals to patiently walks you through three-part harmonies, you wanna’ get that shit right for her too.

Of course, then there’s the kids. Like last-year’s “A Family Holiday Benefit,” “A Holiday Benefit, Vol. II” 826NYC is for them. 826NYC is a nonprofit organization dedicated to supporting students ages 6-18 with their creative and expository writing skills, something I feel pretty strongly about. I mean, what would I be without the ability to express myself in words? Gotta’ get it right for them, right?

But it’s out of my hands now. I just uploaded the 21M file to Kyle Paas and Jeff Swart’s Kingsland Studios.

The CD will be released at our huge benefit performance and silent auction on December 1 at New York City’s Canal Room.

Though you can hear Jamie Leonhart and me harmonizing here first by clicking on that play button below. After you listen, imagine: if :33 can sound this good, just wait ’til you hear Tony, Ryan, Chris, Jamie and me go the full 2:03. It’ll be worth every second.