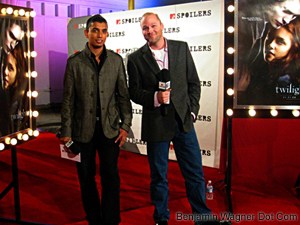 The red eye may be as close as we get to time travel. Without it, there’s far less of a chance that I would have volunteered to fly to Los Angeles for twenty-four hours (well, 12 in the air, and 12 in L.A., anyway).

What would motivate such a trip at the end of a week that included my ninth New York City Marathon and twenty straight hours of election coverage? Stephenie Meyer’s “Twilight.”

At one point this summer, all four novels in Meyer’s “Twilight” series topped USA Today’s top seller’s list. She’s sold more than 17 million copies of the books worldwide, with translations into over 20 different languages. They’re big. “Harry Potter” big. I describe them as “Anne Rice meets Judy Blume,” though of course there’s far more to the series that features a love story between teenager “Bella” Swan and 100-year-old teenage vampire, Edward Cullen.

And, of course, Hollywood’s in on the game. The first installment premieres November 21.

MTV’s “Twilight” coverage has been the story of the year for us, not just because we blundered into it at Sundance last year, then — when it did gangbusters traffic — jumped on it in a big way, but because it’s been a whole new kind of editorial process. In addition to super-serving every element of production from pre-visualization to the premiere, the audience has co-produced the content with us: they’ve sent in questions for the cast, uploaded video reaction to clips and trailers, and even done some cast interviews for us.

It’s become such a story for us — that we bring our authenticity, access and authority and act as proxy, advocate and amplifier for our audience’s enthusiasm — that I’ve created a PowerPoint presentation (I call it “Fancentricity”) that I’ve presented around the company dozens of times. It’s such a great story because it’s all the right moves for all the right reasons.

What I love about the story of our coverage isn’t the business aspect, though, it’s the philosophical one. There’s nothing more moving or exciting than losing your mind with enthusiasm for something when you’re fifteen or sixteen. For me, it was snapping up every R.E.M. bootleg, b-side, poster, and t-shirt I could find. It was being first in line for the band’s new CDs, and sleeping out in mall parking lots for concert tickets (this is well prior to the Internet, kids).

Our new show, “Spoilers,” is built entirely on the “fancentric,” “pre-viz to premiere” philosophy. And so, while my TV-producing colleagues could have produced the event without no sweat, I wanted to be there to see it all unfold. Hence my twenty-four hours of “Twilight.”

7:43 AM ET – Arrive JFK. Without baggage, I breeze through check-in and security.

1:46 AM ET – Captain Sneil’s announcement that the Grand Canyon is below us to the left, and that we’re “following the Colorado River all the way to the L.A. Basin” wakes me up.

2:04 AM ET – Finish New Yorker article on Tom Friedman, “The Bright Side.” “To simplify something accurately,” he says, “you have to understand it deeply.”

1:27 PM PT – Passing Flynt Publications on La Cienega, I notice just how clear and blue the sky is.

1:39 PM PT – Stop by Fine Arts Theater, site of tonight’s shoot. Risers are in place. Red carpet is still rolled up. Step and repeat seconds from assembled. Marquee is still blank, though; don’t wanna’ tip off the kids too son as to what our big film is.

4:51 PM PT – Outside on red carpet for rehearsal. Golden hour light here is ridiculously photogenic (which, of course, is why Hollywood is here in the first place).

5:01 PM PT – Juxtaposition is what makes this town great. Our red carpet is in the parking lot of the Beverly Hills Cleaning Center (aka a dry cleaner).

5:33 PM PT – Not sure I ever realized how many staples, safety pins and rolls of gaffer’s tape goes into television.

6:07 PM PT – Hundreds of screaming “Twilight” fans are queued up along the side of the dry cleaners.

6:08 PM PT – Rehearsal. I stand in for talent for Tim Kash, helping block cameras while answering questions as if I’m Robert Pattison and Kristin Stewart. Problem is, I don’t know much about them, the book, the film, or their roles. Luckily, Tim is well prepared.

6:54 PM PT – Overhead: “Bring me one of those energy drinks, will you please? The one that tastes like root beer and death.”

7:06 PM PT – Spotlight’s swirling above Beverly Hills. Kids are in the stands. Tim’s in position. Waiting on Robert Pattison…

7:42 PM PT – Inside, cast intros film. Curtain parts. Pandemonium. Film rolls. Ooohs and Aaahs and Gasps. It’s awesome. I turn to Ocean and whisper, “Everyone needs to remember what this kind of enthusiasm feels like.”

7:51 PM PT – I’m increasing my $20M opening weekend estimate to $50M based on what I’ve seen of the film (which looks cold and blue and way less cheesy that my generation’s version of this film, “The Lost Boys”) AND the fans here tonight.

8:15 PM PT – Sr. Movies Writer (and primary “Twilight” reporter) Larry Carroll introduces director Catherine Hardwick’s Q&A by talking about how we’re all fans at MTV. Right on. Midway into his preamble, the audience erupts in a spontaneous, “Thank you, Larry!” Wow. Awesome.

8:17 PM PT – Cast bursts in on Catherine’s Q&A. More pandemonium. Question line stretches to back of theater. It’s like Beatles circa ’64.

9:31 AM ET – Home to Hell’s Kitchen. Really glad I went to the taping. I love seeing our audience so excited. 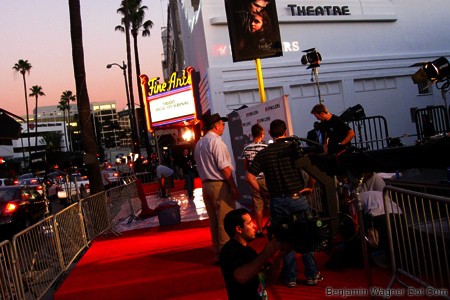 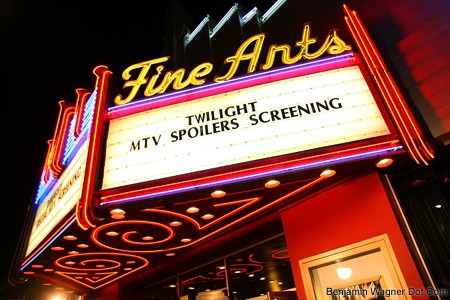