Sometimes I Wish I Was An Academic 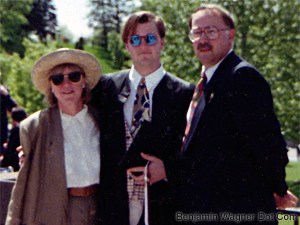 Just days after graduating from Syracuse, I took two of my most beloved professors, Bob Gates and Tobias Wolff, to lunch to quiz them on the pros and cons of academia.

I loved college. I loved the lectures, the discussions, the reading and writing. I loved all the newness, excitement of ideas, and that sometimes my brain hurt. And I was pretty good at it (particularly in contrast to my fairly-average high school performance). So I thought it might be the life for me.

Occasionally, though, I wade into academia. Like last-weeks Networked Journalism Summit. Tonight, I’m returning to CUNY to talk about web video. What follows is an my outline for introduction. The question posed? What is the future of web video. Below, I attempt to answer by addressing what factors have influenced the present.

First, I’m presuming that the Internet’s basic tenants — shorter, lower-resolution, any place, any time, any order — are apparent to all. Academics call it “time shifted” and “non-linear.” Whatever, these are the trains that have already left the station (for better or worse).

Second, that the future of web video is going be influenced by what is succeeding now. Them’s just facts. In other words — for news organizations that are part of Fortune 500 companies (which includes, well, most of them), anyway — clicks are going to drive editorial.

What does well online? I think of The Information Superhighway like I-95 or any other real road. And what do we slow down for? Car Wreck, rubbernecks hot cars, and good looking drivers. Like so…

Similarly, we seem to like the utterly ridiculous. Remember the end of “Broadcast News” when Jane Craig (Holly Hunter) is illustrating the decline of journalistic standards (in 1987!) by showing a massive domino stunt as an example of what’s wrong with the nightly newscast? This may not be journalism, but…

Factor in the fact that everyone and their sister has a DV or webcam and some editing software, and the script is being flipped. It’s the era of the user/producer mash-up. Here we have the aformentioned Peanut Butter Jelly Time mashed up with an MTV News interview with Kevin Federline.

What else drives web video? Uber-personal, confessional and commentary-oriented characters. Like Chris Crocker…

So how have those influences come to bear on MTV News’ traditional interviews and packages? Here are a few examples.

For starters, we’ve engaged our audiences contributions, conversation and commentary, incentivizing their participation by putting the most-compelling on-air. Here, a “Twilight” fan reacts to her first viewing of the new trailer.We’ve asked them to submit questions (which is what led to our well-covered Barack Obama hip-hop pants soundbite). And we’ve invited them to be guest reporters. Here, a “Twilight” fan (and, ergo, expert) interviews the film’s star.Producer Jim Cantiello’s done a terrific job fusing some of the above influences with actual news. Here he brings a fast-paced, bite-sized, character-driven, irreverent and contextual approach to the election in just sixty seconds.Here Jim takes a week’s worth of news and jams it into a silly-but-compelling, well-choreographed (not to mention complicated, difficult and expensive to produce) musical number.Are these examples the future of web video? Probably not, at least in isolation. They do demonstrate, I think, some of the characteristics of what distinguishes web video from television: character-driven, bite-sized, viral and compelling (if not occasionally ridiculous).

Is it a good thing that the future of journalism will be affected by metrics (aka how many people click on something, or — in television parlance — ratings)? Probably not. Do I want to see shorter, more-ridiculous, train-wreck oriented coverage of world and national events? Of course not.

Which I wrestle with. As, I assume, do my panel-mates from PBS, The Washington Post, and Ground Report. We all want to be Walter Cronkite. We all want to work for “60 Minutes.” But we only have sixty seconds. And it has to drive one-million streams in one day.

“How am I supposed to know where the line is when the keep moving the little bugger!?!”