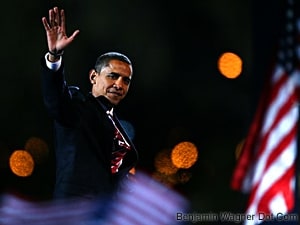 At 10:59 tonight, the crowd 29-stories below my office window began counting down as if it was New Years Eve.

At 11:00, Charlie Gibson called California for Barack Obama, then projected his victory. Which is when the cheering began.

My mother still talks about shaking President John F. Kennedy’s hand when she was a teenager.

In February, I traveled with my colleagues to Scranton, Pennsylvania, to meet Barack Obama. He was articulate, compassionate, and poised. He was congenial, collected and cool. He spoke in language I could respond to: about finding common ground, not difference. And on the way out of his interview, he shook my hand. It was small and coarse. The exchange was brief. But I was thrilled.

The campaign grew increasingly dirty in the intervening months, but Obama remained above the fray. He stayed on message: inclusion, compassion, and hope — values he reinforced again tonight.

Tonight we proved once more that the true strength of our nation comes not from the might of our arms or the scale of our wealth, but from the enduring power of our ideals: democracy, liberty, opportunity and unyielding hope.

Some of my favorite stories begin with yes.

John Lennon met Yoko Ono at her Indica Gallery art opening in London when he climbed a ladder and through a magnifying glass read the one word she had written on the gallery’s ceiling: YES.

“At least” Lennon later recalled, “her message was positive.”

Years later, I dropped to one knee just a few hundred feet from Strawberry Fields and asked Abbi to marry me.

Tonight, then, we begin another love story. One sure to be full of joy and loss, hope and despair, hills and valleys.