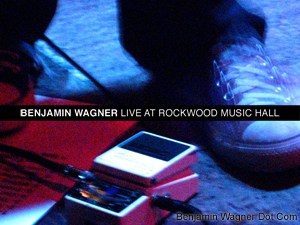 It’s gonna’ be a big rock show featuring all the musicians who made this record possible: bassist Tony Maceli, guitarist Chris Abad, and drummer Jamie Alegre. And yes, the extraordinary Mrs. Jamie Leonhart will be there to lend her divine voice to my cover of “Killing The Blues.”

“Live At Rockwood Music Hall” is an online-only release (so don’t look for it in stores). There are two options: the 8-song iTunes version, or the 10-song Authentic Records‘ version.

The album itself captures the acoustic/electric flavor of a Benjamin Wagner rock show, and features covers of Wilco, Oasis, Don Henley and John Prine. Here’s the track listing:

The live recordings were mastered by Nadas bassist Jon Locker.

The album cover was selected by you, Dear Reader, and features my shoes (Black Converse All-Star Low Tops), my set list (see above), my stage tuner (a Boss TU-2 Chromatic Tuner), and a mess of patch chords.

Do check it out.