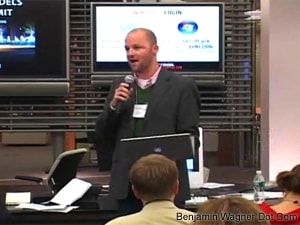 Left to my own devices, I would have fled the scene. In fact, if transparency is the hallmark of blogging, than I’ll be honest: I did flee the scene.

Instead of networking over lunch at the City University of New York’s New Business Model for News Conference last week, I took my salad at my own desk, then returned for breakout sessions.

See, the room was crowded with heavy hitters from NPR, BBC, AP, Reuters, News Corps, and The New York Times; academics from Harvard, Columbia and NYU; entrepreneurs from Now Public, Daylife and Outside.in, plus serious 2.0 pundits like Buzzmachine’s Jeff Jarvis. Heck, Craig from Craigslist was there!

What’s more, the room crowded with heavy hitters was a small one!

Now, I love this stuff (as you gather from the three conferences I’ve attended in the last year or so: Youth Pulse, On Hollywood, and EconSM). I’m an academic at heart; I love ideas. Moreover, though, I consider a fair portion of my job description to be answering the question, “What’s Next?” And these conferences are obviously good for that.

My real motivation, though, was digging myself deeper into the journalism biz. This was a GREAT place for that.

Still, I didn’t think I’d have to SPEAK in front of everyone!

Well, I did. And here’s how it happened.

Basically, the conference was voluntary. That is, it wasn’t a big-deal, fee-oriented confab. It was more like a one-day think tank, a gathering of curious, forward thinking (and desperate, thanks to a flailing media sector, especially newspapers) journalists who wanted to work through some issues like revenue, modern newsrooms, and building networks together.

So after the morning session, we broke into five groups each charged with answering one question each. For example: “What does the newsroom of the future look like?” OR, “How can public funding serve enterprise journalism?”

Each group had a leader and a “rapporteur” (French for “a person appointed by a deliberative body to investigate an issue or a situation and report to that body”). In my group, “Networks,” our leader was former-USA Today Editor-In-Chief and now-NPR Digital EVP, Kinsey Wilson. I was the rapporteur.

Or maybe it was just a stroke of good luck. Because as difficult as it was to summarize our group’s free-flowing conversation, and as nervous as I was to present it to 100+ heavy hitters, it was a great opportunity to impress some impressive people (which is part of the reason I wore jeans, and bright green sweater with a pink, gingham dress shirt under a slate gray sport coat; I wanted to look colorful but respectful, unique but reasonable, memorable but in-context).

So, when my name was called after just four minutes or preparation, I took a deep breath, strode to the front of the room and began speaking…

If “the value of a network is proportional to the square of the number of endpoints,” then one task as digital journalists is to scale our networks — be they organically-grown, hyperlocal blogs or corporate-driven, international communities — as quickly and effectively as possible.

Now, that’s what I wrote in the blog post that was the second half of my assignment. I’m certain that I was significantly less articulate (and there’s web video out there for me to prove it; I just don’t have the intestinal fortitude to actually watch it).

But I did my best, and that was the best that I could do. Optimistically, it was a lucky double. At worst, it was a solid single. Either way, I wanted to race out of the place. But I didn’t. I accepted some faint praise from a few of the members of my group (all of whom agreed it was a difficult two-hour conversation to summarize), carried on a few post-conference, networking-oriented conversations (including one with an author/inventor and a woman from the World Economic Forum, and one with the associate dean of the school).

And then I stumbled into the brisk, New York night, alive, excited… and relieved.