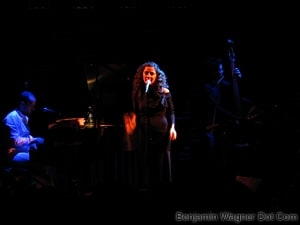 When I was about nine-years-old, my mom had a record called, “I’m Getting My Act Together And Taking It On The Road.” I never listened to it myself. I never had to; it was on the record player incessantly.

The single was called, “Strong Woman Number.” It was a post-ERA, liberation song full of self-awareness and self-discovery.

The album cover was a wildly-curled brunette back-lit by red stage lights.

Which — fast forward thirty years — may as well have been singer/songwriter Jamie Leonhart at her sold-out Joe’s Pub performance tonight.

Jamie has absolutely exquisite control of her voice. She twists and turn it on a dime, whispers, hums and bellows, and delivers angular, syncopated verses and boldly-sweeping choruses. And she’s always, always at the epicenter of the beat and the note.

Between songs, she is genuinely (and adorably) surprised by the sound of her speaking voice, and the very words she says.

Jamie takes performing seriously (when she came over to record “Blue Christmas” last night, she turned down Abbi’s offer of a glass of wine; “Gig tomorrow,” she said), and she meansevery word she sings.

Jamie sings about “shedding [her] second skin,” and “dislocating front the mess you made.”

“If I could take away the pain I would,” she sings, “for just one moment the world [would seem] so perfect.”

“Who put these words in my mouth?” she asks.

Even her choice of covers is revealing. In her melancholy version of Lou Reed’s “Perfect Day,” she sings, “You made me forget myself.”

It’s difficult to imagine what my friend, a self-professed “control freak,” should find so necessary to forget: she is immensely gifted, beautiful, and successful. Likewise her husband, Michael. And — for that matter — her eight-piece band.

But that’s what makes Jamie’s shows — and Jamie herself — so special. Her songs deeply and delicately tease out the some core component of the human condition. Who am I? And how do I know? Throughout her stellar performance, I was reminded over and over of a lyric from my very first album, “Bloom.”

“I wonder if I will ever be the kind of man / To stand above ourselves, outside.”

Fifteen years later, I still wonder. And so, apparently — and gratefully — does Jamie.

Set to meticulously-arranged horns, upright bass, drums, and the tightest pianist you know? Makes for one heck of a school night.