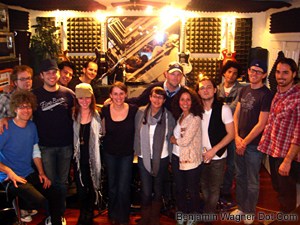 On December 1, the follow up to our now-annual holiday benefit compilation — aptly titled “Rebel Spirit Presents: A Holiday Benefit” — will be released at New York City’s Canal Room.

This year’s record features twelve holiday covers and originals from New York City singer/songwriters like Brent Shuttleworth, Casey Shea and Rosi Golan, plus our collective recording of “Happy X-Mas (War Is Over).”

This is the live account of our all-star recording session.

11:59AM – On L train approaching Lorimer Street with Chris Abad and Jamie Alegre. Once again, we’ve spent 99% of our commute talking politics. But with Palin on SNL last night, and Powell endorsing Obama this morning, there’s lots to talk about.

12:14PM – You know you’re in Brooklyn when you pass a woman in Nicole Ritchie sunglasses and Ugg boots dinking coffee from a recycled jar of almond butter.

12:25PM – Chris, Jamie, and I pile into Kyle Paas’ Kingsland Studio. Jeff Swart and Tony Maceli are already in place. 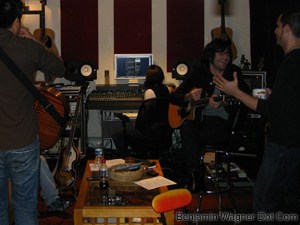 12:43PM – We’ve listened to “Happy X-Mas (War Is Over)” fifteen times already. Tony’s plugged in. Chris, Jamie and Casey are all strumming acoustics. Chris is playing a very Greek-sounding part over Casey and Jamie. “Let’s Greek this shit out.” There are seven dudes in here already. In three hours and seven minutes, there will be another dozen singers laying down vocals.

1:04PM – Our version is coming together. We’re playing it a little faster, with a bit more roll on the snare. “Less plodding,” was my request. The room sounds great. Kyle and Jeff are taking our rehearsals, just in case.

1:08PM – Jamie and Kyle discover they’re both from Canada. So they’re talking in Canadian.

1:18PM – We’re debating whether to end like the original recording (applause, laughter, etc), or with a slow-fade. I’m on the fence. Casey votes we end it our way. Slow fade it is. 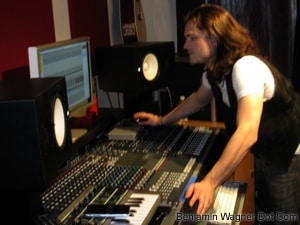 1:41PM – Jamie leads the band through a Mozambique-flavored version of “Happy X-Mas.” Casey is on bass. Tony is on acoustic. Already, our session’s fallen apart. Our final version will be more Lower East Side by way of Brooklyn, but this is cool. And fun.

2:02PM – Testing drum mic levels with Casey’s “Lartigue” with Kyle Pass on drums, Tony on acoustic, and Jamie Alegre on bass. Casey tells me Lartigue is his sisters middle name, and his grandmother’s name (though we all know it’s about his wife, Langhorne). Now they’re playing “Houses Of The Holy.” We’re getting there… slowly.

2:13PM – Ok, maybe not. The guys just played “From Me To You” while Kyle and Jeff fiddles with mics and knobs and such. Unrelatedly, my DayQuil is wearing off.

2:45PM – Just ordered a pizza from Carmine’s on Graham Street. Going to pick up some beer. My work here is done. 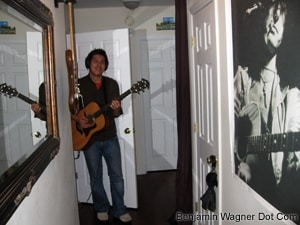 2:55PM – Lost in Greenburgh (somewhere between Greenpoint and Williamsburgh). Brownstones and duplexes next to modern condos. Weird.

3:16PM – Miraculously find my way back to Kingsland Studios (89 Kingsland) like a carrier pigeon or Hansel & Gretel. Can hear the guys tracking from the street.

3:25PM – Drummer jokes begin. “What do drummers and models have in common? They both hang out with rock stars.” 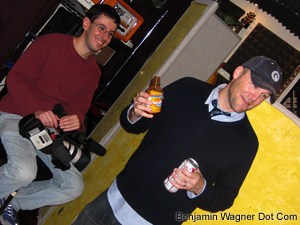 5:03PM – Brent makes the mistake of asking about why we’re doing this record. Ten minutes later, he knows all about Mister Rogers & Me, 826NYC, last-year’s recording, and 90% of my life story.

5:16PM – Ok, Ryan tracked cajone and tambo, now Casey’s tracking vocal before racing to a gig. Then the rest of us are on. I’m sweaty and have already had too much to drink.

5:38PM – Just tracked my vocal. No pressure at all singing three takes with a dozen talented singer/songwriters listening. None at all. Anyway, got it. And Goldner got it on tape. Now Rosi’s on.

5:43PM – Casey’s gone. Rosi’s tracking. Tony and Jamie are on their way to gigs, though I’m holding them a sec for a group photo.

5:56PM- Ben is in the booth with Deena and Rosi and Chris and I have taken over the blog. Ben is giddy and all is good, though we’ve lost the majority of the band to fatigue.

5:58PM – Derek is playing the “Time Warp,” entertaining those of us who are not singing. 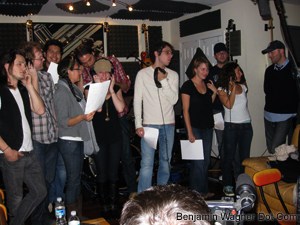 6:04PM – Ben yells at Derek, begging him desperately to “BRING THE THUNDER.” Also, Ian Axel arrives clearly having not slept in days.

6:07PM – We’ve hit a lull. Everyone seems a bit subdued. Ben’s on the terrace, and it’s quiet in the room. Derek is tracking.

6:24PM – Benjamin here. I’ve regained control of my blog! We’re in danger of mutiny here on account of general boredom, so we’re skipping straight to the big choral finish, then getting back to individual tracks.

6:29PM -First off, Ben is no longer in control of the blog (it’s me, Jamie Leonhart) and it’s true, mutiny is here. Ben’s trying to regain control, but it’s not happening. And he yelled at me again. Yunno, in a nice way.

7:03PM – Benjamin is in the bathroom. We’ve just finished the group singing. Mayhem is the word to best describe the event, but it was successful nonetheless… 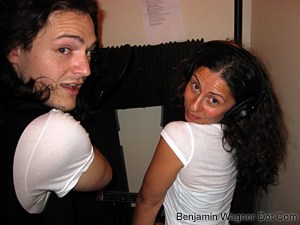 7:38PM – Ben has given up on the blog, so I’ve taken over (Jamie again) After all this time, I finally did my line. Yay. And now I”m going home. Peace out.

7:41PM – Given up is a stretch, but I am tired. And maybe just a little buzzed. Anyway, Jamie, Brent, and Bryan just tracked their vocals (much rock!) so we’re DONE!!! 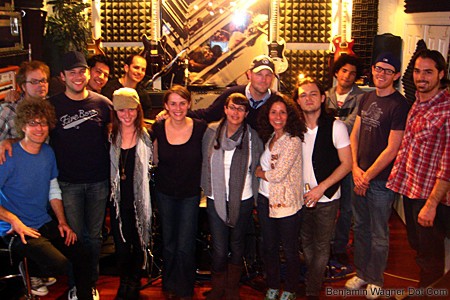