Roll Your Windows Down, Part III 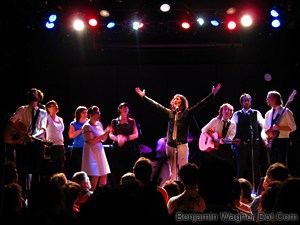 All the best stories are trilogies (or should have been): Star Wars, The Bible, Lethal Weapon. There’s something elemental to the rise, fall, and major lift.

And all the best heroes go out on top: Perseus, Odysseus, James Dean.

Tonight then, to that end, we celebrated the cacauphonous conclusion of the Lower East Sides’ favorite white-boy, acoustic rhythm and blues revue: The Undisputed Heavyweights.

Scuttlebutt was that our pal Casey — the heart, soul, and shtick of The Heavyweights — had chosen to close the chapter on this sideshow before the tawdry, silly tale grow tired or cliché, or, worse, eclipsed his earnest, soulful solo efforts. Fresh from the pursuit a bonafide record deal with his all-star, three-part rock trio, Sundown that was dashed by corporate homogenization, there was the distinct sense that Casey was shedding the excess layers to get back to where he came from: three chords and the truth.

First, though, one, last epic performance. And everyone got in on the act. At one point, opener Mike Grubbs (aka Wakey! Wakey!) had ten local musicians on stage with him, including Stellastarr guitarist Michael Jurin, and singer/songwriters Tanya Buziak and Tarrah Reynolds.

And why not? The Bowery Ballroom is where indie goes to go big. For a lucky few — The Strokes, Nada Surf — it’s a bridge between the dank, black-box, low budget-back end LES stages, and The Technicolor Big Time.

And while our boys could probably have crossed that bridge, there’s some kind of beauty in their not. This is a band that never released more than an unmastered, crowd-noise cluttered EP. A band whose introductions last ten minutes, and more resemble a Baptist revival than a rock show. This is a band whose irreverent, gimmicky live show fills the room, but whose substantive, moving songs (a few of ’em at least) fill your heart.

This is a band that — as Casey exclaimed early in the performance, went undefeated — “One hundred and fourteen thousand, fifteen million, billion… and 0!!!”

That record alone had the audience hanging on his every whisper and howl during “Money,” then turning nostalgic during “Back To You” when he leaned into guitarist (and Laurel to his Hardy) Jeff Jacobson, and harmonized, “Remember when it felt so nice?”

Casey’s “Lartigue” and Jeff’s “Lunch in the Park,” though, began to reveal the true appeal of The Heavyweights. It’s not difficult to imagine the two spending endless afternoons debating John and Paul, “The White Album” and “Sgt. Pepper’s Lonely Hearts Club Band.”

But it wasn’t until Kyle Irvin’s cameo on Sam & Dave’s “You Don’t Know Like I Know” that it dawned on me: like Eminem and Elvis, Casey & Co. bring the irrational exuberance of the Deep South to the chilly, industrial north. For just a brief window of time, The Undisputed Heavyweights have created a space in this cooler-than-thou metropolis where it’s ok to be enthusiastic. It’s all about the James Brown squeals, the Muscle Shoals arrangements, and the Memphis horns. It’s all about the “Amen!”

And the sex appeal. When, during the languid, loungy, “A Girl Like You,” our sweaty leading man found himself in a hailstorm of over-sized underpants, he greeted the obviously-orchestrated overture by tugging a purple thong over his trademarked white jeans and strapping gray briefs and pink granny pants to his ferocious mane.

All good things must end, though, and The Heavyweights did so the only way they could, with a final, rousing, full-on sing-a-long version of the band’s beloved, “Roll Your Windows Down.” This time, as Casey sang tenderly to a rapt room, “Because tomorrow is not today, and it’s getting old,” we knew he meant it.

The band stumbled offstage, but we kept singing the refrain over and over like a mantra until, finally, wistfully and warmly conceding, “It’s all behind you.”