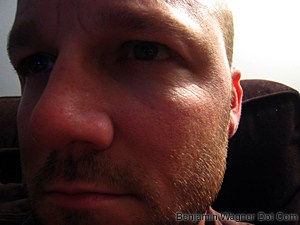 You’re sitting in a windowless, fluorescent-lit conference room on the seventeenth floor of a Midtown corporate headquarters reviewing the network’s Q4 Programming Calendar when it dawns on you.

You’ve promised your best friend, a guy you’ve known since you were ten-years-old, that you’d meet him in back home for his induction into your high school’s sports hall of fame.

At the same time, on the same night, you’re booked to play a rock show at a prestigious music festival — a gig you’ve already re-booked once on account of your journalism day job interfering with your rock ‘n roll fantasy.

Now, you’ve played the festival once before, but here’s the wrinkle: this year, you’ve been asked to moderate a panel. No big deal, really; you just have to keep a conversation going amongst a couple of guys in front of a few dozen college students.

Thing is, your two worlds — this twenty-year-old backup plan — are about to be validated (not that anyone outside of your wife will really know, or understand, but you will).

Moreover, this confluence of your split-personality — journalist and musician — has taken twenty years manifest. Truth is, you don’t draw so well anymore, especially at seven o’clock on a Saturday night.

Yup. The “you” is me. The friend is my best friend and groomsman, Sibby Browne. The gig is my CMJ show at Alphabet Lounge. And it all came crashing down this morning.

So what did I do? I called Abbi, and asked her. After a few minutes of preamble, she sighed and said, “Honey, if you’re asking me to tell you what to do, I can’t.”

I turned and faced the window, put my feet up on the sill, and stared out towards the Chrysler Building.

First, I ran through the financial considerations. Which version of that weekend would be most cost effective? Rehearsing, paying the band, commuting 160 blocks round trip in a taxi, and plus a bar tab? Or a train ticked and rubber chicken dinner?

Second, I ran through the relational considerations. Disappoint a friend whose had your back for 26 years? Or a booker whose done you a ton of decent favors?

Then I thought about my ego, ‘cuz canceling the gig was gonna’ bruise a little bit.

Somewhere in all the calculations, though, the right thing to do became apparent. It all boiled down to personal pronouns. Me? Or you?

And so, on October 25th at 7pm, Jamie, Tony, Chris and I will not be performing at Alphabet Lounge as part of the College Music Journal Marathon.

Instead, I’ll slither up to the cash bar at a suburban Philadelphia country club and buy my friend — a guy I’ve known nearly three fourths of my life, a guy with whom I dressed up as Crockett and Tubbs for Halloween, a guy who stood up for me at my wedding, a guy who said, “Hey, the local paper needs a high school soccer correspondent” and pointed me towards my first job in journalism — a cold, refreshing, well-earned beverage. And then I’m gonna’ raise my glass and say, “Here’s to you, Sibby.”