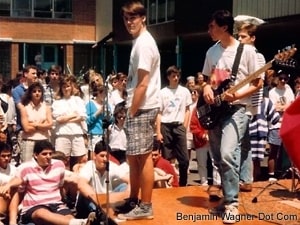 In just a few weeks, you’ll be laying in a hospital bed with a broken jaw. You’ll look in the mirror but — what with those wired teeth and that Elephant Man swelling — fail to recognize yourself. It’s a whole lotta’ trauma on account of a girl, and a knuckleheaded football player, and it’s gonna’ bruise for a long, long time.

One year from now, though, you’ll step from the gymnasium stage, stoned and squinty-eyed, with a diploma in your hand, and a duct tape question mark on you maroon cap. Shortly thereafter, you’ll be heading north to a cold, gray freshman year at Syracuse University with a pony tail and Ray Bans, a fairly significant lack of confidence, and a new name: Benjamin.

Six years from now, you’ll move to New York City with $400 in your pocket and no real plan. The good new is, your brother will carry you until you can walk on your own. What’s better, you’ll do a stint at Rolling Stone, then land somewhere even cooler. The bad news is, you’ll be smoking pot 24/7 to try and deal with whatever leftover adolescent baggage you refused to unpack.

Right now, though, it’s 1988. May, to be exact. You’re standing in the courtyard of Conestoga High School in Berwyn, Pennsylvania. Your band, Underground, is one of five performing at the school’s annual Lunch Munch. That’s bassist John Leggette and guitarist Jason Knoft over your shoulder. You’re about to open with REM’s “Strange.” And while your classmates are just standing there with their arms crossed, it’ll all turn… eventually.

And — believe it or not — your future wife will tap you on the shoulder after a show sixteen years from now and say, “Nice set.” And she’ll be right; it was.

For now, though, lighten up. Put your shoulders back. Smile. Enjoy. It only seems complicated: the heartbreak, the drama, cliques and popularity contest. You can’t know this now, but that failed bid for student council president? Doesn’t really matter.

And those Converse All-Stars are a solid, timeless call. But trust me on this — you work at MTV now and you know — no one plays a rock show in plaid shorts. No one. Ever see Bono in clamdiggers? Michael Stipe in capris? Exactly.

But I’m writing you from 2008. Twenty years have passed. The posture, the shorts, the scowl, the lack of confidence; they’re not ok anymore. A whole bunch of stuff is gonna’ happen, some good, some bad, some planned, some unexpected.

Relax; it all turns out fine. Remember that.