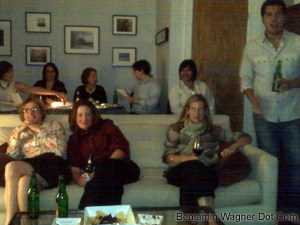 Once again, it was debate night in Hell’s Kitchen.

And once again, Chris and Meg Abad hosted a viewing party of epic proportions.

We drank beers, ate nachos, and yelled at the TV screen. We gaffawed at CNN’s silly graphics, played Palin Bingo, and chugged on a number of key phrases (“maverick,” “reform,” “change,” etc.).

And we worried about the future of the country. (I said to Chris at one point, “Yunno, I didn’t think anyone could top Bush’s folksy, down-home, faux-authenticity schtick. Tonight, I stand corrected.”)

Here’s my blow-by-blow as tapped into my Blackberry:

8:09 – At least they’re making eye contact with each other.

8:14 – Darn, heckuva, gosh… Palin’s colloquialisms are getting old fast (though I imagine it’s playing well in my home state of Iowa).

8:24 – I find the candidate’s direct addressing of the camera extremely creepy.

8:25 – I think McCain’s proposal that we all buy into free-market health insurance is problematic (see also: my thirty thousand dollar hospital bill).

8:26 – I’m beginning to think Mrs. Palin might be the spawn of Satan himself. Cuz if you were gonna bring evil into the world, wouldn’t you do it in the person of a skinny, white, bespectacled librarian who talks about soccer and “regular families” while drilling for oil in national parks, peddling perks to lobbyists,and generally dragging down the discourse of American politics?

8:30 – I’m watching this debate with a dozen friends many of whom are cracking wise (which is fine, and fun). I’m straight-faced, though, ‘cuz I’m afraid people outside of our (extremely awesome and cool) cadre of hipster, Northeast media elites might be buyin’ what she’s sellin’.

8:59 – THREE shout outs for Kim Jong Il. You KNOW he’s sittin’ there in his palace watchin’ CNN with a big, self-satisfied grin.

9:30 – Biden Closing Statement: Dug into a very deep hole, indeed. “Champ, when you get knocked down, stand up.” I”m ok with that.

9:33 – Oh jeez, she’s holding that baby again. And it’s sleeping, again. Why is it always sleeping? What does she put in its formula?

In the end, I think we all acknowledged that Mrs. Palin performed well. That is, she didn’t seem to say anything, or have much idea what she was saying, but she didn’t train wreck. There’s no denying that she’s charismatic, and oddly likable (much like a SuperSized Big Mac Meal: looks good, tastes good, bad for you).

Biden, while long-winded and a little detailed for general comprehension, seemed smart, experienced, and ready for the gig.

And so we called it a night, streamed out onto 55th Street, and scattered to our little corners of New York City, one step closer to performing our civic duty.