The Dust Cloud Disappears Without A Trace 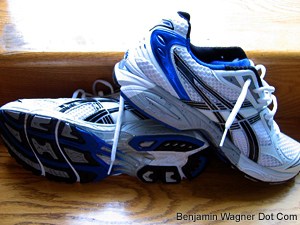 Two weeks ago this afternoon, I was in surgery.

This morning, I was back on the road, running 4.87 miles in just over 51 minutes.

Abbi and I rose in the dark, stretched, and started slow. We ran west towards the river, north along Hudson River Park, then up into Riverside Park.

It felt great to be outside, breathing fresh air, and watching the sky wake up. I had some pain in my right knee (still, three years after that rogue playground accident) for a second, but that subsided once I warmed up. I could feel some tightness in my stomach (I inadvertently and unironically referred to it as “stitches”), but nothing prohibitive or problematic. And my lungs felt fine, despite Dr. Dawson’s suggestion that I might find my first few runs, “Heartbreaking.”

To the contrary, my first run in over two weeks was encouraging thanks, in large part, to Abbi, who — after two weeks of jogging alone in silence — patiently responded to my steady stream of recent news, overnight brainstorms and general plans.

More than just patiently enduring my prattle, though, Abbi helped pave the way for my speedy return to marathon training. Two weekends ago, just days after my release from Lenox Hill Hospital, she came home with a brand-new pair of “white lightning and brilliant blue” Gel Kayano XIVs tucked under her arm. This morning, they made their New York City debut.

Saturday morning, they’ll run their first half-marathon; next weekend, a twenty mile training run; and in just thirty-days, they’ll carry me from Staten Island to Central Park in what will be my ninth New York City Marathon.

And no, I won’t be out to break my personal best (3:56:24); I just want to spend some quality time with my wife, and cross the finish line.

And yes, it’s probably ambitious. But like Spike Lee says, “If you allow failure to enter your mind, you’re defeated already.”