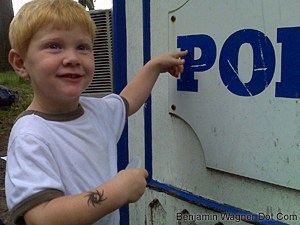 I called my sister-in-law from the lobby. My nephew answered.

“Where are you?” he asked in his hushed, adorable phone voice.

“I’m on my way to the park to meet Aunt Abbi,” I replied.

“So are we!” he said, only slightly-more enthused.

“See you at the finish line!” I said.

I called my dad from 57th Street.

“Where are you?” he asked. “Sounds like you’re playing in traffic.”

“Doc said I can’t run ’til Monday, but he didn’t say anything about the bike!”

I entered Central Park at Columbus Circle and merged carefully with 5,000 New York Road Runners. I rode slowly, talking with my father (on headset) while scanning the crowd for my wife and brother who were, by just after nine o’clock Sunday morning, closing in on their 18-mile finish line.

“So how’s your weekend been?” he asked.

“It’s kinda’ blown, frankly,” I responded. “We watched the debate with Chris and Meg and the Abadfest Crew Friday night, which was a blast. I mean, the debate wasn’t, but playing CatchPhrase until two o’clock in the morning was.”

“But yesterday sucked,” I continued, dodging an errant roller blader. “I was in the office until midnight yesterday turning around this Obama interview we snagged. We cranked out a bunch of great articles and blogs, but it gobbled up the whole day.”

“Beats the alternative,” he said.

I lost my breath a bit climbing Cat Hill, but otherwise felt fine. I spotted Abbi — who’d run the eighteen miles in under three hours — walking with Jennifer at the 102 Street Transverse. Chris and the boys walked up behind.

Ethan and Edward were a sight in their rain boots. Ethan showed me his temporary tattoos. Edward spelled out “police.” They were a bundle of kinetic energy, hiding behind every tree, climbing every hill, exploring every nook and cranny. Rain began to fall again as we walked towards home.

My rear tire exploded as we waited to cross the street. We all jumped.

“What was that?” Ethan asked.

“Well,” I explained*, “Because The Universe’s primary action is entropy. That is, all energy changes decrease the amount of useful energy in the universe. Or, in other words, the general progression of things is from order to chaos. So… tires pop.”

And so Abbi and I bid our beloved nephews farewell, then sat on a bench in the rain while I struggled to replace the innertube. Even as I managed to remove the tire and insert a new innertube, though, my pump broke.

Moments later, though, as I inflated the innertube outside Bicycle Rennaissance, a bubble formed. I went in side, humbled myself before the staff (in my experience, bike shops are only a step above music shops in terms of employee arrogance and aloofness), then hit three street again.

I walked the remaining fifteen blocks hanging my helmeted head in tights and a bike jersey (there are few sadder sights, I think, than a bicyclist walking his flat-tired bike).

Abbi and I spent the rest of our Sunday eating comfort food and watching TV on the couch.

* Of course Ethan and I didn’t discuss thermodynamics. I just said, “Because it was old.” Which is pretty much the same thing. Or not.