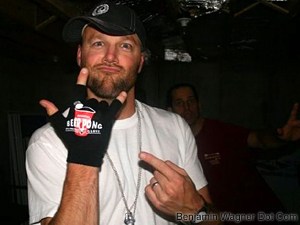 For a few hours before my whole emergency appendectomy ordeal, an entirely different health issue was at hand.

See, I like fire. Always have. Just ask our former neighbor, Ron Wells, who nabbed my brother, Christofer, and I behind the hedges with a can of gasoline, a box of matches and a few hand-crafted tiki torches.

Still, when it became apparent that Abadfest ’08 — the annual Andover, Vermont-based celebration of singer/songwriter (and all-around awesome dude) Chris Abad’s birthday — was running low on firewood for the most-excellent backyard fire pit, I did what any other kid who was born in Iowa, lived there for three weeks, then grew up in various Midwestern and Northeastern cities would have done: I grabbed an ax, and began felling some trees.

Well, not exactly. But I did get the axe out of the basement, pull a few logs from the backyard wood pile, and begin splitting. Or trying to split. It had rained all night, so the pile was wet. Which might explain the semi-circle of dudes crowded around me. Either they dug the gun show, relished watching me sweat, or were convinced I was gonna’ lose a limb (frankly, I wasn’t entirely sure I’d emerge unscathed myself).

I got into the swing of it (pun intended, sorry), and split a few, then repaired to the front yard to find a few more. See, New York City rock ‘n roll quartet, Rich Girls was setting up on the back porch. Imagine: a bunch of tattoo-strewn, bad ass, bonafide rock stars right there in Chris’ backwoods backyard! I wasn’t about to let ’em down with some twiggy, wimpy little campfire. No sir, we were building a towering inferno.

Abadfest ’08 was a weekend of disco balls, grocery-store bling, and Bud Lite.

Abadfest ’08 was also deep in the Green Mountains of Vermont some 222 miles from New York City, and 44 miles from the nearest city (Brattleboro, population 8,160). It was the country. There were bugs.

More specifically, there were bees. Lots of them. So much so that one of the Wiffle Ball ™ teams called itself The Hornets. (The other was The Mosquitoes. You get the idea.)

On August 25, 1996 (I remember the date well, as I was due at the Democratic National Convention in Chicago the next morning), I was swarmed and stung by a hive’s-worth of angry, homeless bees. (You’d have been angry too if a bunch of knuckleheaded stoners had sprayed your hive with flaming Lysol.) Within minutes, I looked like The Elephant Man. Were it not for the fact that my mother was having dinner with a doctor friend who immediately phoned in a prescription for prednisone to the local CVS, well, who knows.

Back to Abadfest ’08, and me chopping wood alone in the front yard. And that pile of logs. And those bees. And me feeling a sharp pain on my left shoulder blade. And then my left hand. And then dropping the ax and running around the front yard swatting the little buggers away like mad.

Fast forward an hour. Rich Girls are absolutely tearing up the back porch. It’s one for the record books, a sight to behold. Front man Matt Basile is strutting, staggering and spitting whip-smart lyrics like “Exile”-era Mick Jagger crossed with “Ziggy”-era David Bowie. Guitarists Sean Kensing and Mike Vitacco are trading licks and lines. Drummer Jamie Alegre (yeah yeah, I’m biased ‘cuz the guy’s in my band, so what?) is owning his kit like it’s Madison Square Garden, not, well, a garden. The sound is thundering around the surrounding forest and valley. It’s truly impressive.

And the fire’s raging.

And my hand is swelling.

And everyone’s checking out my increasingly huge paw.

So Abbi is worried.

But life is still good because there’s no indication whatsoever that I’ll be in the hospital barely twenty-four hours later when those pesky bee stings and that swollen meat fist will be the least of my worries.