This Little Light Of Mine 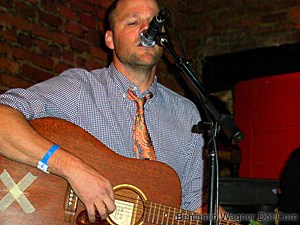 I think Dr. Dawson thought I was kidding when, a few minutes into Wednesday’s post-op recovery I asked him if I could play my “rock show” on Saturday.

“Listen,” I said (sounding an awful lot like I was talking him into it), “It’s at five o’clock in the afternoon, it’s all-acoustic, I’ll be sitting down, and it’s for the kids.”

(I would find out later, as I gave him a sneak peak of my set list, that his grandmother’s brother-in-law wrote “You Are My Sunshine.” Coincidence? Fate? You be the judge.)

Chris and I meet at the top of the street. I think, ‘I don’t remember this street being so long. Or so steep.’ It’s 4:31. I tell the cabbie that we have twenty-nine minutes and seventy blocks ’til showtime. The cabbie does his best, but New York is not on our side.

It’s nearly five o’clock and still broad daylight as we stride towards Rockwood Music Hall. Through the window, I see a room full of thirtysomethings and kids, many of whom I don’t recognize. ‘Are they here for us?’ I wonder.

The place is absolutely crawling with adorable awesomeness. And it takes them neither time nor excuse to dance. When the music starts, so do they. We trot out the first few from “Invention.” Lack of rehearsal notwithstanding, they come naturally now. “Giving Up The Ghost,” “The Last Time” and “Promise” are part of the canon, a second skin.

“Kids,” I quip, “Tell your parents it’s available on iTunes.”

Chris cameos with “No Myth” (“What if I was Romeo in black jeans?”) and sets the dance floor ablaze. A small space in front of the bar (where Shirley Temples are outpacing Brooklyn Lagers two-to-one) becomes the de facto dance floor. The kids — ranging from two to sixty-two — are alright.

The objective, though, is a full-on sing-a-long. Casey Shea gets ’em started with his by-request (my request) “Roll Your Windows Down.” He sticks around to add his harp “You Are My Sunshine.” And we drive it home with “This Little Light Of Mine.”

That’s why I wanted to play an all-ages show to begin with.

Because the light’s in all of us. Lord knows, it saved my butt more than once.

And who knows? Maybe it’ll make a difference to one of these kids.

Judging by how emphatically Edward was boppin’ his head to our big “The Boys Of Summer” encore, odds are good.